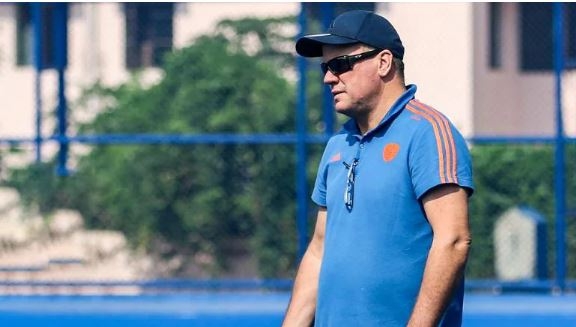 New Delhi: A historic Olympic bronze medal in its pocket, the Indian men's hockey team is eyeing several milestones in the coming years, the preparation for which will begin next month, chief coach Graham Reid said on Friday.

The team won a bronze at the Tokyo Games earlier this month, ending a 41-year wait for a medal in the sport.

Talking about the roadmap ahead, Reid said, "We have set some milestones in terms of competitions that are coming up for us now. We have Asian Games, FIH Pro League, Commonwealth Games, Hockey World Cup in 2023 and then Paris Olympics the following year.

"So the milestones have been set, but how we need to prepare between those milestones will be decided in the next month or so," Reid said on Hockey India's podcast series 'Hockey Te Charcha'.

The Australian said he will take feedback from the players going forward and analyse what other teams have been doing.

"We also have to sit down and analyse all the games from the Olympics and see what the other teams have been doing, because you never get the time to do that in the middle of a tournament, when the focus is limited only on the next opponent.

"We also need to get feedback from our players on what they feel are the skills that they need to work on going forward, and surely we need to accelerate our learning to be consistently up there with the best teams in the world all the time."

Reid had won a silver medal as a player for Australia in 1992 Barcelona Olympics. However, clinching a bronze as chief coach ranks amongst his most impressive achievements.

The Indian team's schedule was adversely affected due to the COVID-19 pandemic, but Reid believes the extended period of time that the team spent together in camp at SAI Bengaluru eventually brought the players closer together and shaped their character as a group.

"I kept saying to the team that the adversity and the resilience that they have shared together will come to the fore and unite them when the chips are down.

"Look at bronze medal match. We were 1-3 down, it would have been very easy to give up and admit it's not our day, but we didn't do that. We pulled ourselves together and displayed a magnificent example of fighting back and taking the next step from that position one at a time," said Reid.

On the setback in the second match of the Tokyo Olympics when India lost 1-7 to Australia, Reid said, "Since day one, I have tried to instil a 'next thing mentality' in the team. After facing a disappointing result, you cannot get caught up thinking about what you could have done.

"The next thing you need to do is the most important. You can change the future, but not the past. So after the disappointing result against Australia, we drew a line in the sand before getting to the Olympic village and decided not to ponder on the result any longer.