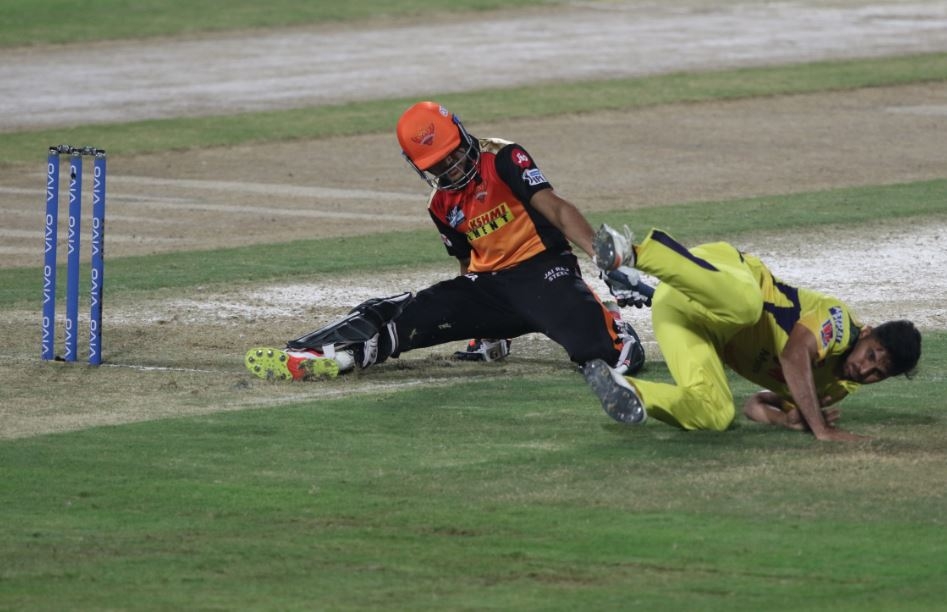 On collision course: Priyam Garg and Shardul Thakur collide during the match | BCCI/IPL

Sharjah: Chennai Super Kings became the first team to confirm their spot in the playoffs of the IPL after defeating Sunrisers Hyderabad by six wickets at Sharjah Cricket Stadium.

Chasing 136, Chennai overcame a mini-collapse in the middle to reach the target with two balls to spare. It also makes Hyderabad the first team to be knocked out of the tournament.

Chennai were in complete control of the chase from the word go. After a sedate start of 12 for no loss in three overs, Ruturaj Gaikwad and Faf du Plessis smashed Bhuvneshwar Kumar for a six each on the on-side in the fourth over. In the next over, du Plessis creamed Jason Holder on both sides of the ‘V’.

Gaikwad went after Rashid Khan, top-edging a sweep over fine-leg, followed by a straight six down the ground. He also got an lbw decision overturned to leave Power-play unscathed at 47/0. Du Plessis brought up the half-century of the opening partnership with a straight loft over Siddarth Kaul’s head.

Hyderabad broke the 75-run partnership at the half-way stage with Gaikwad lofting to mid-off off Jason Holder, falling five runs short of his half-century. Moeen Ali continued the flow of runs with boundaries through pulls off Holder and Khan. In a bid to go big, Ali tried to heave through the leg-side off Khan in the 15th over. However, Ali inner-edged to the pads and ball rolled to the stumps.

Holder had two wickets in the next over, trapping Suresh Raina leg-before, followed by du Plessis who top-edged a pull to short mid-wicket. With 22 runs needed off 18 balls, Rayudu lofted Kaul over extra-cover.

In the next over, Rayudu launched Kumar for a six over long-on. It was followed by Dhoni crunching a four through the cow corner to calm the nerves in the Chennai camp.

Dhoni finished off the chase with a huge six over deep mid-wicket off Kaul in the final over to seal a playoff spot for his team.