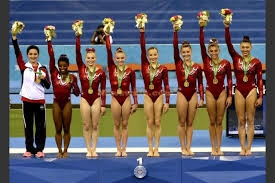 London: More than 600 athletes representing a record 91 countries and regions have registered for Olympic qualification at this year’s Artistic Gymnastics World Championships in Glasgow, signalling that the 2015 edition will be the biggest in its history. The draw for the 46th Artistic Gymnastics World Championships, at which will qualify the top eight teams and individual event medallists for the 2016 Rio Olympics, was held on Wednesday at the Glasgow City Chambers, reports Xinhua.

The draw plays an important role in strategy and preparation. Both men and women will compete during two days of qualification each. Qualification will include 12 subdivisions for the women, to be held on October 23-24, and eight subdivisions for the men, held on October 25-26. The event runs through November 1. At stake in Glasgow are not only world titles but team and individual qualification berths to both next spring’s Olympic Test Event in Rio de Janeiro and next summer’s Olympic Games. The top 24 teams from the 2014 World Championships in Nanning, China, will compete in Glasgow, where the top eight men’s and women’s teams from the team qualification round will automatically earn team berths to the Olympics.

Teams ranked ninth through 16th will advance to the Rio Test Event in April 2016, where the top four teams (also from the qualification round) will also punch their ticket to the summer Games. Gymnasts who earn a medal in individual apparatus event finals also qualify directly to the Games, provided they come from a country or region that has not already qualified a team. Teams ranked 17th-24th at the 2015 worlds will be allowed to send two individual gymnasts to the 2016 Test Event, while other national federations with a gymnast who participates in all-around qualification at the World Championships will earn the right to send one gymnast to the Test Event based on the gymnast’s ranking. In this way, 40 male and 40 female gymnasts will qualify to the Test Event.

The reigning world team champions, China (men) and the United States (women) will be defending the team titles they won in Nanning in 2014. Both teams are the reigning Olympic team champions and hope to repeat the result a year from now in Rio.