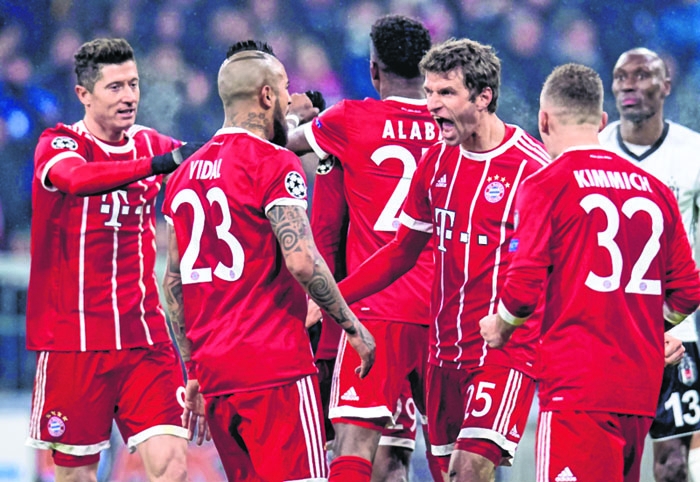 Ahead of their Champions League encounter against Benfica, Bayern Munich are suffering from ongoing unrest in the club.

The team might have delivered a satisfying answer in the league beating Union Berlin 5-2 after the devastating defeat in the German Cup in Monchengladbach. But in-house tensions keep coach Julian Nagelsmann and chairman Oliver Kahn busy.

The team is struggling to regain game dominance over 90 minutes while sporting director Hasan Salihamidzic faces growing doubts regarding the efficiency of his work.

Debates about Lucas Hernandez and Joshua Kimmich give evidence of how fragile the club's atmosphere is, reports Xinhua.

The French international narrowly escaped from a prison sentence due to a case of domestic violence in 2019. Kimmich's refusal to get vaccinated for Covid-19 entails controversial discussions in the club and the German public.

It has become apparent; Bayern aren't invulnerable despite an impressive season start turning the side into one of the favourites of this season's Champions League campaign.

The two-week-long quarantine of fully vaccinated coach Nagelsmann after a positive COVID-test seems to have thrown the team off course. The 34-year-old is expected to return for full duty by this Tuesday in time for the Champions League group game against Benfica.

In addition, Kahn's restructuring measures in the club's leadership board are causing turbulence regarding the Bavarians' internal balance.

After the dismissal of Jorg Wacker, responsible for international issues, media reports talk of Salihamidzic seems caught in the crossfire of criticism. Reports speak of Kahn being unsatisfied with the sporting director's transfer record as nine players left for 160 million over the past four years despite their market value of 230 million.

Kahn is concerned about the club's financial future having to compete in an overheated market.

Salihamidzic valuation might depend on the outcome of the race for Barcelona full-back Sergino Dest and the negotiations with French 2018 world champion Kingsley Coman about a contract extension.

Nagelsmann faces the challenge of reinstalling his team's confidence. Following the historic 5-0 Cup defeat, the league game in Berlin revealed Bayern hasn't yet overcome the effects of the humiliation.

"We might be in a good mood after the victory in Berlin, but we are still out of a competition that was important to us," star striker Thomas Muller said. "We are not back to good now."

Nagelsmann seems aware, the way back to happiness might turn into a bumpy road. The 34-year-old admitted he now has to provide solutions for his players and adjust the team's game approach.

Bayern fans might have to live with a less spectacular style in many games. The sportive turbulences are proofing, well-oiled teams are well-advised to budgeting their resources in their attempt to reach their target finish.

Bayern might reduce their efforts and count on pragmatism until crunch time in the Champions League is starting next spring. Nagelsmann said he is aware to survive as Bayern's coach, it needs silverware to please the club's leaders.