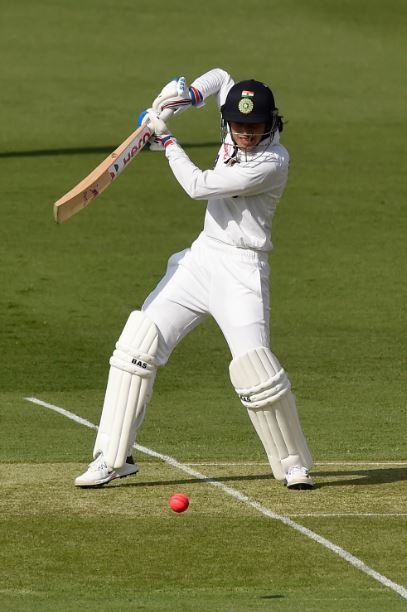 Gold Coast: Indian opener Smriti Mandhana shined bright with her highest score in Test cricket before rain forced the closure of the first day of the one-off pink-ball Test against Australia at Metricon Stadium here on Thursday.

At stumps on Day One, India finished with 132/1 in 44.1 overs, with Smriti remaining unbeaten on an eye-catching innings of 80. Punam Raut was the other unbeaten batter for India on 16, with the partnership for the second wicket at 39.

Smriti went past her previous-best score in Tests, 78 against England in Bristol in June this year. She was fluent through off-side while hitting 15 boundaries and one six in her unconquered 144-ball knock to put India in a position of ascendancy in their first-ever pink-ball Test.

She also put an opening stand of 94 runs with Shafali Verma, who was the only wicket to fall in the day to left-arm spinner Sophie Molineux. Almost two hours were lost in the second session before play began. After 28 balls, rain made a comeback to ensure only 44.1 overs were possible on the first day.

Put in to bat, the immensely-watchable Smriti raced to her half-century off 51 deliveries with a cover- drive off Tahlia McGrath in the opening hour and despite slowing down, remained rock solid for India.

Darcie Brown and Annabel Sutherland had nervy starts to their Test careers, the former going for 0/28 off her four overs while 19-year-old Annabel had a couple of fumbles in the field including dropping Shafali when the Indian opener was on 25.

Annabel's spill was the third time Shafali rode her luck in her knock, with edges earlier in her innings twice eluding Meg at first slip as Australia pressed for a breakthrough.

India were 70/0 at drinks with Smriti the main aggressor, hitting 11 fours on her way to her third half-century in Test cricket. After the drinks break, Australia turned to spin to stem the runs with Sophie Molineux and Ashleigh Gardner operating in tandem.

Sophie eventually got the breakthrough for Australia in the 26th over, luring Shafali to free her arms. The teenaged opener sliced to Tahlia at mid-off to fall for 31. Sophie ended the day with 1/18 from nine overs.

Australia are currently leading the multi-format series 4-2 heading into the only Test, which carries four points for a win and two points in case of draw.

How well do you know Smriti?

Her father and brother (Shravan) played cricket at the district-level, for Sangli. She was inspired to take up the game after watching her brother play at the Maharashtra Under-16s tourneys

Essentially a right-hander, she trained herself to bat with the left-hand since her father had a fascination for southpaws

She gave up science in school to focus more on cricket

Became the first Indian woman to score a double hundred in a 50-over game in 2013. Playing for Maharashtra, Smriti smashed 224 off 150 balls against Gujarat

She made her Test debut in August 2014 against England at Wormsley Park.