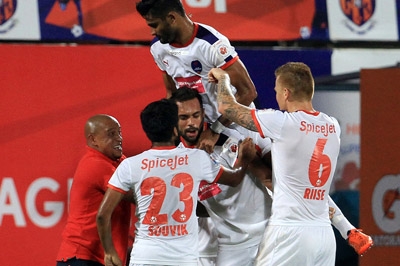 Pune : Delhi Dynamos jumped to the third spot in the India Super League (ISL) with a 2-1 victory against Pune City FC on Wednesday.

India striker Robin Singh scored the first goal in the 24th minute at the Shree Shiv Chhatrapati Sports Complex Stadium. Richard Gadze made it 2-0 for the Dynamos in the 90th minute. Uche reduced the margin for Pune moments later.

Dynamos shot to six points from three matches but remained just behind Pune who remained ahead due to a superior goal difference.

It was Pune’s first loss of the tournament after two consecutive opening round wins, who remained on six points after three games but stayed in the second place.

Pune began the match better and had more of the ball possession sending down more crosses into the box than Dynamos. Midfielder Jakichand Singh hit a first-time volley straight at the goalkeeper in the 11th minute.

Dynamos replied with a goal, scored by their tall striker, Robin Singh in the 24th minute, who returned to the team from international duty.

French marquee man Florent Malouda’s inswinging corner into the far post was nodded in by an unmarked Robin. Dynamos preserved the lead to go into the break 1-0 and maintained their momentum and tried to extend their lead after the break.

They however had to remain alert at the back as Jakichand was a threat. Pune stepped up the pressure and got several corners but couldn’t capitalise on them.

Dynamos’ Brazilian coach Roberto Carlos introduced the defensive minded Sehnaj Singh in place of the attack oriented Shylo Malsawmtluanga in the 66th minute in order to shore up the midfield.

Pune coach Englishman David Platt went into an all out attack mode, bring on Eugeneson Lyngdoh for Jakichand in the 72nd minute.

Lyngdoh was in the centre of action three minutes later when he essayed a dangerous ball in the box but it was tentatively cleared by the Dynamos defence.

Pune came close to equalising in the 84th minute when their marquee Tuncay Sanli pushed a low cross towards the goal. But Dynamos’ high-profile defender John Arne Riise effected a goal line save.

The match produced some late drama as Richard Gadze extended Dynamos lead in the 90th minute, which looked like the insurance goal they needed to secure all three points.

But Pune reduced the margin in a matter of seconds when Nigerian forward Kalu Uche headed in a Lyngdoh cross from the left flank. But it came too late in the day for Pune as the referee blew the final whistle soon after.