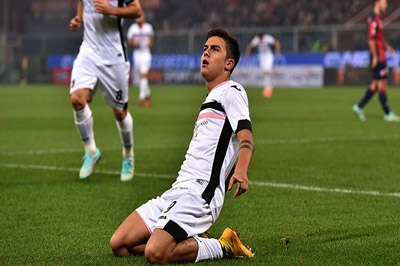 Turin: Italian club Juventus’ Argentine striker Paulo Dybala has said   he is hopeful “to win our fifth consecutive Italian league title” in Serie A next season, an accomplishment he would consider “a historic feat.” “I want to win our fifth consecutive Scudetto. It would represent a historic feat,” Dybala said in a Twitter conversation with fans of The club on Wednesday, reports Efe. The player, who joined Juventus in June for the next five years, called the Turin-based team “winning, illustrious and historic,” and confessed that what impressed him most was seeing the Juventus stadium.

He told his followers that his passion for football started with his family, as his father was a great fan and his elder brothers also played. “I don’t have a good luck charm, but before playing I say a prayer for my dad,” he recounted. Among the other glimpses into his past, he said his idol as a child was Ronaldinho, “always with a smile on his face.” When asked about his strengths on the field, he said his speed that creates the most difficulties for his opponents. Last June, Juventus announced the purchase of the Argentine for 32 million euros ($34.8 million), although the price may increase by 8 million euros ($8.7 million) to fulfill certain conditions during the contract period.