Delhi FC had chances in the remaining part of the first half but it was good work from Goa's defence that kept them at bay.
IANS 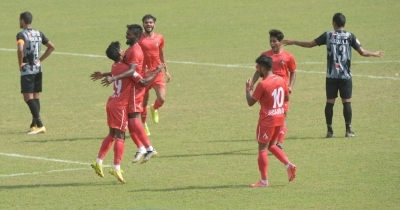 Kalyani: FC Goa continued their brilliant run to outplay Delhi FC 5-1 in a quarter-final match of the 130th Durand Cup football tournament at the Kalyani stadium on Friday.

Goals from Devendra Murgaokar, Muhammed Nemil and Brandon Fernandez in the first half and Leander D'Cunha and Romario Jesuraj in the second, meant the Gaurs will, despite Delhi getting one back from Nikhil Mali, take their place in the second semi-final on Wednesday at the Vivekananda Yuba Bharati Krirangan (VYBK) in Kolkata.

They await the winners of Saturday's fourth and final quarter-final match between fellow ISL side Bengaluru FC and Army Green, also scheduled at the VYBK.

Delhi FC started well in the first quarter creating quite a few opportunities for themselves. Anwar Ali and Willis Deon Plaza had their chances at scoring but failed to convert each time.

It was all FC Goa after that. In the 15th minute, Devendra Murgaokar scored the first goal and his fourth of the tournament to put the Gaurs ahead. Muhammed Nemil scored another, three minutes later.

Delhi FC had chances in the remaining part of the first half but it was good work from Goa's defence that kept them at bay.

Brandon Fernandes then lobbed a curler from the left flank over Delhi keeper Lovepreet in added time, to give Goa a big cushion of 3 goals at half time.

Delhi FC looked like they came with a plan in the second half and showed some resilience initially but luck was not on their side. They did pull one back in the 82nd minutes with Nikhil Mali scored a smart goal after an even smarter Willis Plaza dummy inside the Goa box, spoiling the clean-sheet of Dheeraj under the Gaur's bar.

It took Goa just a couple of minutes to regain the three goal cushion as Leander D'Cunha scored from an overhead kick which did not quite catch his foot where he would have liked it to.

Alexander Romario Jesuraj scored the fifth and final goal in injury time to seal the deal for FC Goa. Leander D'Cunha was adjudged the Man of the Match for his match winning performance. 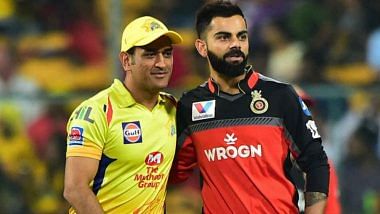 IPL 2021, CSK vs RCB: Toss delayed due to sandstorm in Sharjah; watch video