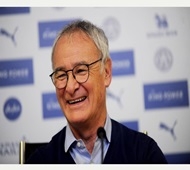 PICTURE MIKE SEWELL Leicester City manager Claudio Ranieri speaks to the media at the King Power stadium ahead of this weekend's game with Manchester United. (for Rob Tanner) |

London: Jubilant with his side’s maiden Premier League title, Leicester City manager Claudio Ranieri has heaped praised on his players’ determination and focus that led his side to the recent glory. Leicester City, a small club from central England that started the season at 5000-1 odds of winning the prestigious English Premier League title, lifted their maiden trophy in the club’s 132-year history after Tottenham Hotspurs were held to a 1-1 draw by Chelsea in their league clash at Stamford Bridge.

Ranieri, who is amazed after winning the trophy, said he is extremely proud of his players who kept their feet on the ground throughout their journey to glory, the Mirror reported.  The 64-year-old, who described himself as a `pragmatic` man, revealed his strategy was just to focus on one match at a time and help his players to improve with each passing week.  Ranieri further insisted that his title-winners deserve to be the champions as they had fought for the crown in every game. The manager, however, would not be able to join his team in their celebration as he has gone to meet his 96-year-old mother, Renata.  Leicester will play their next inconsequential match against Everton on Saturday.