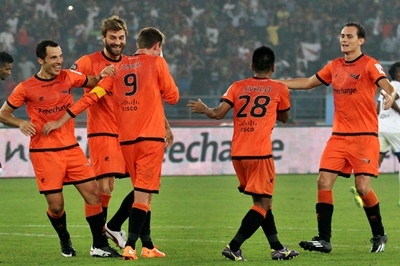 The Associated Chambers of Commerce and Industry of India (Assocham) will organise the maiden BRICS U-17 football tournament next year in the country. Delhi Dynamos will participate in the tournament and will also be involved in grassroots and Corporate Social Responsibility (CSR) related activities of the tournament. Delhi Dynamos FC’s marquee player-manager Brazilian legend Roberto Carlos was present at the conference held to announce the partnership here on Monday. “We at Delhi Dynamos FC have always worked towards the development of the game at grassroots level. The partnership with BRICS Football Cup will not only promote better football interaction among BRICS youths but will also bring together people from different cultures,” Delhi Dynamos president Prashant Agarwal said.

“The tournament will provide a huge platform to young athletes and encourage them to showcase their talent. Given that the BRICS Football Cup has now kicked off with the Under 17 age group, should the event include a senior tournament in the future, Delhi Dynamos will be proud to represent India at that level as well.” BRICS is an association of five major emerging national economies: Brazil, Russia, India, China and South Africa.