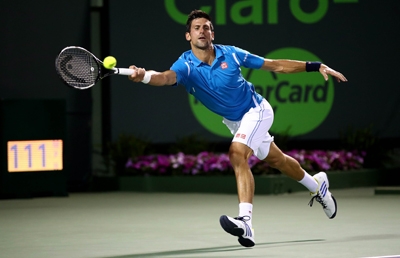 Novak Djokovic secured a victory for Serbia, 40-year-old Feliciano Lopez got defending champion Spain off to a solid start, and a young Italian team rolled past the 32-time champion United States in the Davis Cup Finals.

Djokovic beat Dennis Novak 6-3 6-2 to give Serbia a 2-0 lead over host Austria after Dusan Lajovic had defeated Gerald Melzer in three sets to open the best-of-three series in Group F on Friday.

"It feels great to play for Serbia again," said Djokovic, who helped his country win the Davis Cup in 2010 but more recently failed to win a medal in either singles or mixed doubles at the Tokyo Olympics.

"It's been a long year but you always find motivation playing for your country." Djokovic won seven consecutive games from 3-3 in the first set to take control.

"I'm really pleased with the way I ended the match today," he said.

Djokovic had also been scheduled to play in a potentially decisive doubles match but then was replaced by Nikola Cacic after winning his singles match.

Lopez was thrust into singles action when Carlos Alcaraz had to be dropped from the team after testing positive for the coronavirus on Thursday, as Spain was already without injured Rafael Nadal and Roberto Bautista Agut.

The United States, meanwhile, got off to a rough start against host Italy in Turin. Lorenzo Sonego beat Reilly Opelka 6-3 7-6 (4) in his home city in Group E and then Jannik Sinner dominated against John Isner 6-2, 6-0.

Still, for an Italian team missing its top player, Matteo Berrettini - who is injured - it was quite a start.

The semifinals and final will be played in Madrid.