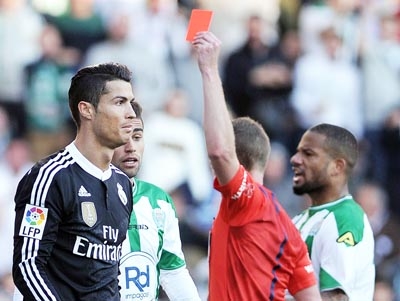 London: Portugal football team captain Cristiano Ronaldo could reportedly be banned for almost twelve matches after being sent off for punching an opponent during Real Madrid’s La Liga clash against Cordoba. The World Player of the Year kicked and hit out at Cordoba defender Edimar and was shown a straight red card during Saturday’s La Liga clash.

A Spanish newspaper has reported that Ronaldo could be booted out of the league for as many as twelve games if found guilty of excessive aggression when a disciplinary panel meets on Wednesday. Such a severe action would be extremely surprising, as another Spanish newspaper revealed that the referee didn’t deem the incident to be violent conduct in his post-match report.

In the said report, the referee failed to reference Ronaldo’s punch, which appeared to land on Edimar’s face, suggesting that he hadn’t seen it, the Mirror reported. The referee’s account of the events state that in the 83rd minute Ronaldo was sent off for the following reason: kicking an opponent when the ball was out of reach.

If Ronaldo is banned for just the one match, he would only miss next weekend’s home match against Real Sociedad, but if he were to be banned for three or more games, he wouldn’t be available for selection for the February showdowns with Sevilla or Atletico Madrid and more. Ronaldo apologised for his uncharacteristic actions on Twitter, posting that he apologises to everyone and especially Edimar for his thoughtless act in the game.