"You didn't give me award, you had to give me hospitality box," says Sunil Gavaskar after honour; Dilip Vengsarkar stand at Wankhede a tribute to his tears, says Sachin Tendulkar

The MCA named a section of the North Stand in honour of Dilip Vengsarkar while Sunil Gavaskar was honoured with hospitality box
S. Sudarshanan 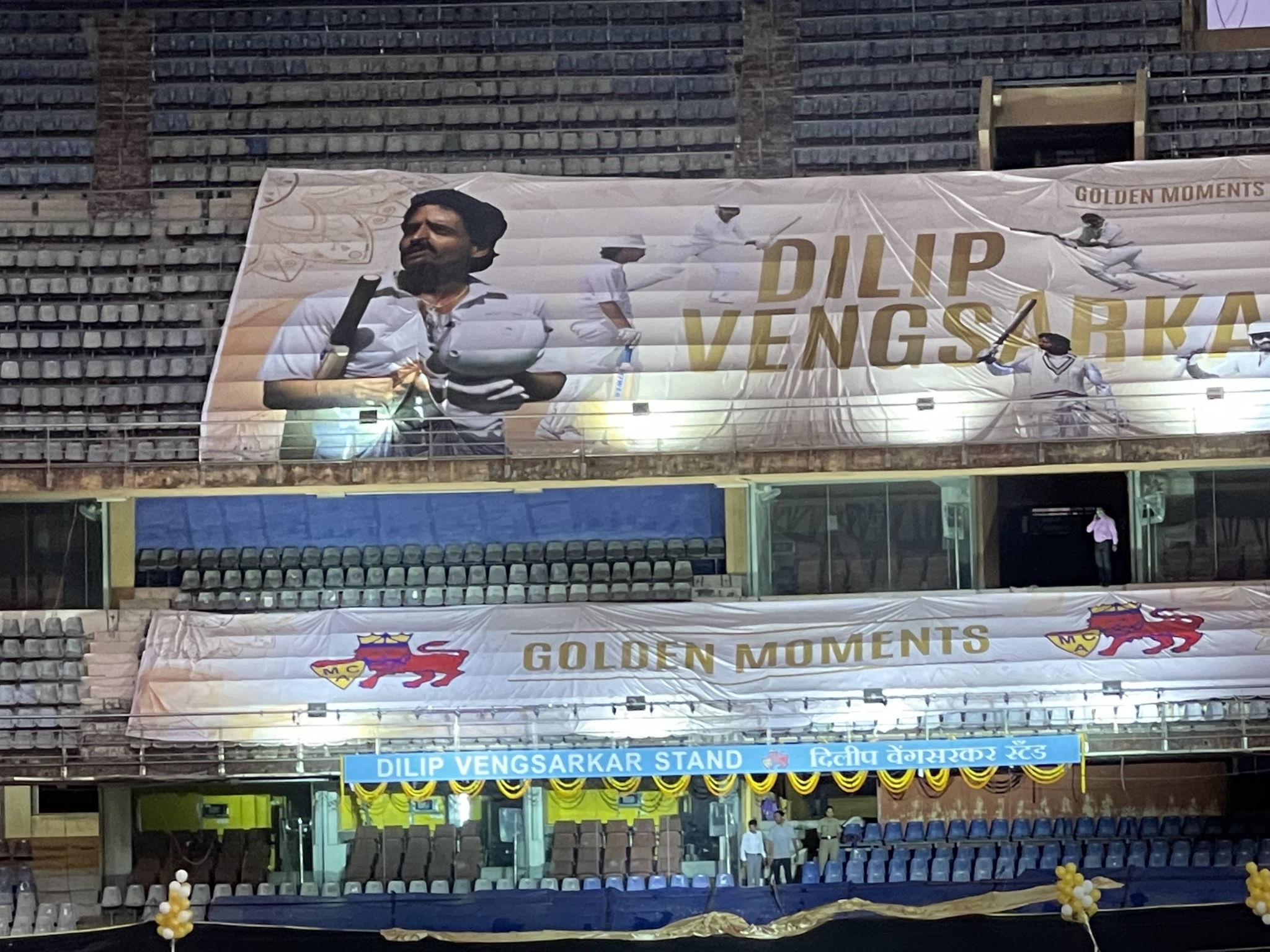 In the final of the Ranji Trophy in 1990-91, Mumbai were chasing 355 for an outright win against Haryana. Dilip Vengsarkar’s unbeaten 139 and Sachin Tendulkar’s 96 meant that Mumbai ran Haryana close, before Vengsarkar, literally, ran out of partners and his team fell short by a mere two runs. A dejected Vengsarkar walked in the dressing room, heads down, and sat in a corner with tears in his eyes and towel on his head, despite his mind-boggling effort.

“The stand in Dilip Vengsarkar’s name is a tribute to those tears,” said Tendulkar speaking at the event hosted by the Mumbai Cricket Association at the Wankhede Stadium on Friday. A section of the North Stand at the venue was honoured in Vengsarkar’s name and the Sunil Gavaskar hospitality box was also inaugurated.

Tendulkar recalled his first day in Indian team’s nets, expressing gratitude to Vengsarkar. “I had seen many youngsters bowling to India’s players in the nets. But when I was called to the nets, Vengsarkar asked Kapil Dev to bowl to me and have a look.” And rest, to use a cliché, is history.

The hospitality box in Gavaskar’s name was to commemorate 50 years of his Test debut – vs West Indies in Port of Spain in 1971. The MCA also kicked off the centenary celebrations of former India wicketkeeper-batter Madhav Mantri’s birth. Gavaskar paid tribute to his maternal uncle by recalling an incident from his childhood.

“I used to open his cupboard, see many caps and blazers and tell him, ‘you have so many of these, please give me one’. He told me, ‘you won’t get it just like that. You have to strive hard, persevere and earn it. And remember, that joy will be incomparable’.”

Speaking at the occasion, former India captain Gundappa Viswanath picked Gavaskar’s 221 against England in 1979 to be his best knock. “The way he approached the knock was unbelievable. The weather was not good for cricket. Playing the English attack (likes of Bob Willis and Ian Botham) in those conditions…Sunil said we have to go for it (438-run target and India got to 429/8). But unfortunately, we settled for a draw.”

Coincidentally, both Gavaskar and Tendulkar missed out on getting the MCA award for the best junior cricketer in their playing days, something that left them dejected. While Tendulkar said that a handwritten note from Mantri made him feel good, Gavaskar quipped, “You (MCA) didn’t give me best junior cricketer in 1965-66 and that inspired me to do so well, that you had to give me the hospitality box.”