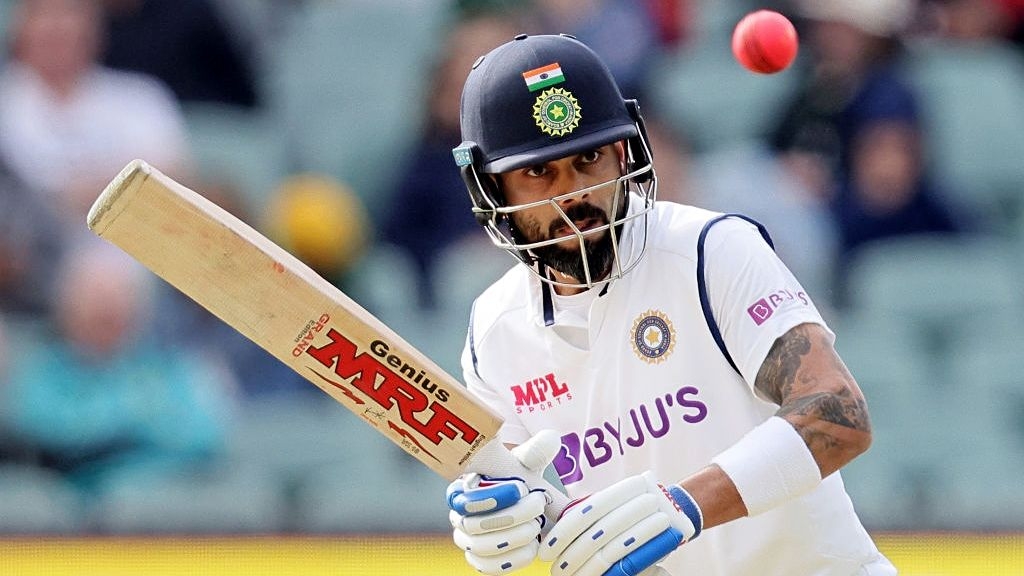 After MS Dhoni handed over the reins to Virat Kohli, beginning with Test cricket in 2014 and limited-overs in 2017, the 'run machine' has come a long way in establishing his credentials as one of the best leaders in world cricket at present. Kohli, who is seen as an amalgamation of the batting and captaincy styles of Indian legends Saurav Ganguly, Sachin Tendulkar, Rahul Dravid and VVS Laxman, has so far led India in two ICC events—Champions Trophy 2017 and Cricket World Cup 2019. However, the 32-year-old is yet to taste success in world tournaments. His team was demolished by Pakistan in the final of Champions Trophy in 2017 and was then stunned by New Zealand in the semi-final of the Cricket World Cup in 2019. Now, India is all set to play the World Test Championship final against the Kiwis at the Ageas Bowl in Southampton from June 18-22. And this is the skipper's best chance to grab his first ICC trophy.

Kohli has always led his team with passion and exuberance, and this time will be no different. When recently asked if the limited preparation for the World Test Championship final will put his team at a disadvantage, Kohli said he isn't too concerned. The skipper said he believes that his team has the requisite understanding of conditions from its past experience of playing in England. "...look, in the past we have landed in places three days prior even in a proper schedule and have had a hell of a series and hell of competition, so it is all in the head," Kohli said. "...it is not the first time we are playing in England, we all know what the conditions are like. And even if you are used to the conditions, if you don't enter the field in the right frame of mind, you are going to nick that first ball or you are going to find it tough to pick wickets," he added.

Most of us have been a witness to Virat Kohli's captaincy from his Under-19 days, and unlike MS Dhoni's, we all can predict Kohli's decisions ahead of time. The flourishing of fast-bowlers and the lack of quality spinning options in this Indian side, gives us a clear indication of the skipper's preference. And the team selection for the World Test Championship final will be a testament to this.

Kohli will be keen on having four seamers with Ishant Sharma, Mohammed Shami and Jasprit Bumrah, Shardul Thakur—who is clearly an all-rounder—is likely to get an opportunity over R Ashwin purely due to English conditions. Packed with quality batsmen, Kohli is also likely to add KL Rahul into his team and leave out the young Shubman Gill for this marquee clash. The skipper will have huge hopes from the likes of Rishabh Pant and Ravindra Jadeja, whereas expectations from the old guard comprising of Rohit Sharma, Chetestwar Pujara and Ajinkya Rahane will be sky-high.

It was during India’s first-ever pink-ball Test match against Bangladesh at the Eden Gardens, Kolkata in November 2019, when Virat Kohli last scored a ton. Since then, we all have been waiting for the skipper's elusive 71st century in international cricket. Make no mistake, he looked in fine form against England in the recently concluded series at home, however, a century still awaits him. Kohli recently said, "I never played for hundreds in my life, probably why I ended up getting so many in such a short while." "It’s more important for the team to win. If I get a three-figure score and the team doesn’t win, it means nothing," the right-handed batsman added. Carrying the weight of expectations of 1.3 billion people is no mean feat, but it is the standard that Kohli has set which leaves his die-hard fans wanting for more.

The skipper is undoubtedly the best batsman in the team. He is the mainstay of India's batting lineup. If he gets going, there is no stopping his team from lifting the coveted World Test Championship trophy. Kohli also has plenty of experience playing in English conditions. After having a torrid time in 2014—registering scores of 1, 8, 25, 0, 39, 28, 0, 7, 6 and 20 in five Tests, Kohli made the necessary changes to his technique and came off with flying colours in 2018 as he plundered 593 runs in the series. Kohli's batting will definitely be tested against the likes of Tim Southee and Trent Boult in the World Test Championship final but the champion will surely find his way.

Former cricketers give Kiwis an edge over India:

Several former cricketers have backed New Zealand to start as favourites going into the World Test Championship final as they will get accustomed to English conditions after playing two Test matches prior to the big event. Also, the conditions are not entirely different from that in New Zealand, which gives the Kiwis an edge over India.

While Scott Styris feels New Zealand will win the summit clash, former India pacer Ajit Agarkar said it is difficult to pick one team. "I think New Zealand will win and they will win by 6 wickets. I think Devon Conway is going to be the highest run-scorer and Trent Boult will get the most wickets," Styris said. "It's a difficult one to pick -- who is going to win it. I think New Zealand might just start favourites in this one," said Agarkar. Meanwhile, former Australian pacer Brett Lee thinks the two sides are "pretty evenly matched", however, he adds the experience of New Zealand because they have bowled in conditions which are similar back home will help them.

India's poor record against vs New Zealand in ICC events:

When India take field in the World Test Championship final, they will be up against a poor record versus New Zealand in major ICC events stretching back to 18 years. India's seven-wicket win in the 2003 World Cup under Sourav Ganguly was the last time they beat the Kiwis in an ICC tournament. Skipper Virat Kohli will be itching for revenge, however, he must be wary of the mild-mannered Kane Williamson and his team in order to lift his first ICC trophy.