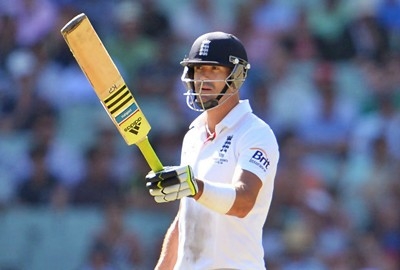 Starting the final day of the match on 98 for two in pursuit of 438 for victory, the West Indies slumped to 162 for five at lunch at the Vivian Richards Cricket Stadium in Antigua before recovering to reach 350 for seven at close of play, reports CMC.

“I’m not surprised at all. We knew the kind of cricket we were going to be playing going to go five days,” said Bell, who hit 143 in the first innings to score his 22nd Test hundred.

“I certainly didn’t turn up here expecting for them to roll over and this to be an easy series. You never expect that in any international cricket, let alone a Test team.

“I expected competition. Last time I was here I sat on the sidelines but they were long five-day Test matches; it was hard to get 20 wickets and I expected exactly the same,” he added.

England, under pressure to get a positive result in the series, face the West Indies in the second Test which bowls off here on Tuesday.

And with the pitch at the Grenada National Stadium expected to be another flat one, Bell said it was important that England found new ways to bowl the West Indies out twice.

“There’s talk of there being a bit more bounce here than in Antigua. West Indies swung the new ball nicely in both innings – so we have to use the new ball well and get a few wickets early – and we’re going to have to change our plans, get a lot of men in front of the bat,” the experienced right-hander said.

“Moeen (Ali) is back in the squad, which gives us options, but we’ll have to work out a formula in the next couple of days which helps us get 20 wickets.”

Moeen, an off-spinning all-rounder, was not named in the original tour party but arrived in the Caribbean to join the squad for the second Test.

Bell, meanwhile, is one of the squad’s senior players with over 7 000 runs, an average of 45, and 106 Tests. He was named vice-captain for the series, a responsibility which he relishes. “It’s nice to have that responsibility, officially as well,” he noted.