Williamson happy to play his way 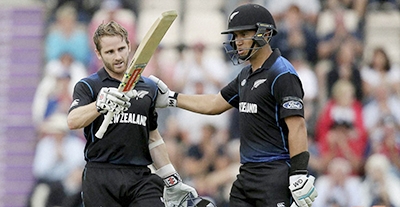 Southampton : New Zealand’s Kane Williamson was happy to prove elegance and timing still had a place when batting in one-day international cricket with a brilliant century in a three-wicket win over England on Sunday.

The Black Caps, chasing 303 for victory, were wobbling at 36 for two.

But a New Zealand record third-wicket stand of 206 between Williamson (118) and Ross Taylor (110), ultimately proved decisive.

There have long been anguished debates about whether advances in bat technology and modern-day power-hitting are making ODI cricket too much of a batsmen’s game.

But the 24-year-old Williamson proved the traditional virtues of touch and timing remain effective in white-ball cricket.

Indeed his final scoring shot, in a sublime 113-ball innings which included 12 fours, was a seemingly effortless straight six off David Willey.

“I don’t think aggressive has to mean slogging or hitting the ball 150 metres,” said Williamson.

“I think the style of play is what you want to achieve in an innings and the runs you want to get and that dictates who’s picked,” added Williamson following his seventh hundred in 77 matches at this level.