What are some of Virat Kohli's top knocks in T20 World Cups? 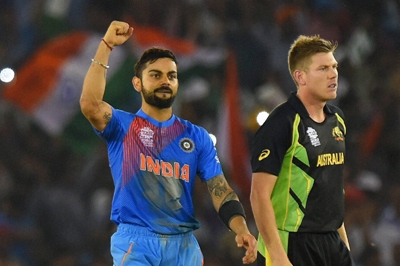 India begin their T20 World Cup campaign in the Super 12 stage with a clash against their arch-rivals, Pakistan, at the Dubai International Cricket Stadium. This edition will be Virat Kohli’s last as the captain of Team India, having announced his decision to step down at the end of it. In T20 World Cups, Kohli has played 16 matches with the 2012 edition being his first. With 777 runs already, he is India’s leading run-getters in the competition. Let’s take a look at some of his top innings in T20 World Cups.

89* v West Indies, 2016: His last innings in the competition was one of his best, not just as a batter but also with the ball. He walked in after India had a slowish start against West Indies at the Wankhede Stadium in Mumbai. Rohit Sharma and Ajinkya Rahane had added 62 for the opening wicket. Kohli walked in and began steadily with Rahane for company. After Rahane fell, the right-hand batter changed gears and decimated Andre Russell and Carlos Brathwaite in the death overs. He finished with 89 not out off just 47 balls but it wasn’t enough. With the ball, he broke the 97-run stand between Johnson Charles and Lendl Simmons.

82* v Australia, 2016: In Mohali against Australia, Kohli rewrote a book on finishing cricket matches in style. India were set 161 to win and lost Shikhar Dhawan after a slowish start. Rohit Sharma, too, fell a couple of overs later as India were 37 for two at the end of the powerplay. India kept losing wickets at regular intervals with Suresh Raina and Yuvraj Singh also falling. With 67 needed off the last six, Kohli put on a masterclass, using his bottom hands to exploit the are through mid-wicket. James Faulkner’s penultimate over was taken for 19 with Kohli taking 16 off those. The penultimate over of the match saw Kohli belt Nathan Coulter-Nile for four fours, before hitting one off Faulkner to take India home. He struck a sublime 82 not out off just 51 balls.

72* v South Africa, 2014: Kohli starred in yet another run-chase for India, when they needed 173 to win the semi-final of the 2014 edition. He came in in the fourth over after Rohit Sharma’s fall and in the company of Ajinkya Rahane, got himself in. After that, he showcased his array of strokes easing India’s passage to a win. He made a stroke-filled 72 not out and got to hit the winning runs after captain MS Dhoni decided to block out the final ball of the penultimate over.

50 v Afghanistan, 2012: In his very first T20 World Cup game, Kohli showed why he was regarded highly. Against Afghanistan in Colombo, he came in after India lost Gautam Gambhir early. He then struck a masterful half century off just 39 balls as India posted 159/5. That eventually proved to be sufficient as Afghanistan were bowled out for 136. Kohli hit four fours and two sixes in his knock.