WHAT A GAME!: Twitter reacts after India beat England by 157 runs in 4th Test to register their first win in 50 years at Oval 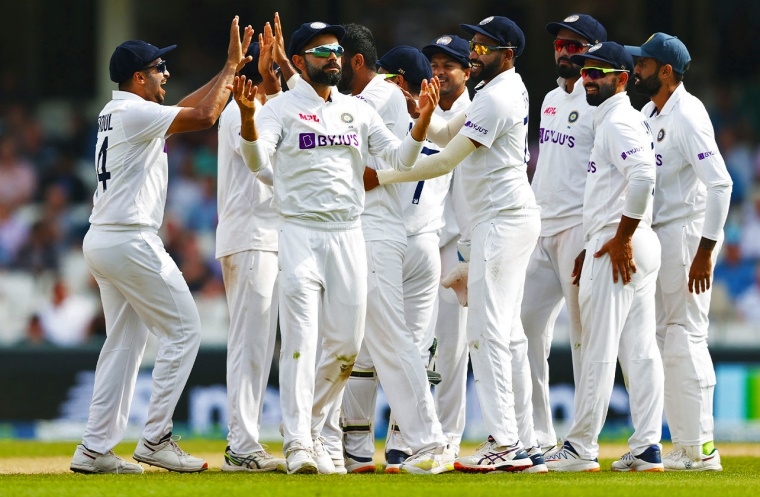 Indian skipper Virat Kohli celebrates India's Jasprit Bumrah wicket of England's Ollie Pope during the 5th day of the Fourth Test match between England and India at The Oval, in London on Monday. | ANI

India pulled off a sensational 157-run win in the fourth Test against England, only their second-ever at The Oval and first at the venue after 1971, to take an unassailable 2-1 lead in the five-match series. This is also only the second time in history -- after 1986 -- that India have won two Tests on one tour of England.

They had beaten England by 151 runs in the second Test at Lord's last month.

The likes of Jasprit Bumrah, Shardul Thakur and Umesh Yadav stepped up while Ravindra Jadeja succeeded pitching the ball into the rough consistently as India sealed a famous win from behind yet again after conceding a 99-run lead in the first innings.

England openers had done well to negotiate 32 overs and score 77 runs chipping away at the 368-run target.

However, soon after India's stunning performance Twitteratis showered praises on the team for putting up a sensetional show.

What a win #TeamIndia 🇮🇳#ENGvsIND @BCCI

After seeing India's historic win against England at Oval & the performance of @imShard, England's queen has requested @BCCI to reserve the Lord #Shardulthakur's jersey number 54 for her.#INDvENG #ENGvsIND #ENGvIND @imVkohli

Thanq shardul Thakur not for just good batting and bowling . . But also almost ending the career of the Ishant Sharma. . #INDvENG #ENGvsIND

Contrary to what this article suggested, it absolutely is the end of the road for Ashwin in overseas tests. Ashwin is a better test cricketer than Kohli. Yet Kohli gets to drop him. https://t.co/43ylE2yU0K#ENGvIND #ENGvsIND #engvsindia

For a long time he had been the go to Batsmen in SENA&has played many memorable &matchwinning knocks... personally for me very depressing to watch him struggle like this😔&like Pujara he too finds his touch soon#INDvENG #ENGvsIND #TeamIndia 🇮🇳#Master #Beast