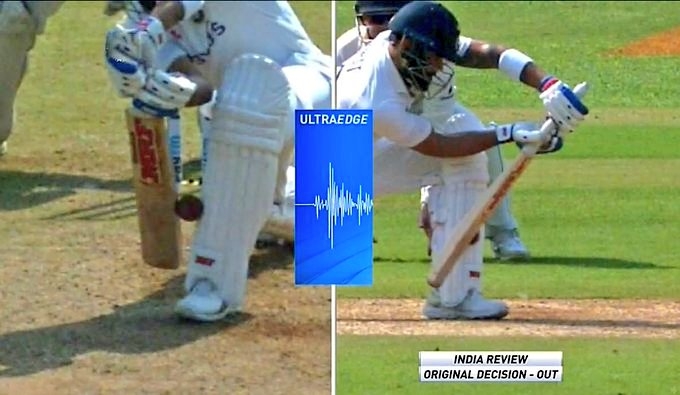 Virat Kohli was ruled out LBW off spinner Ajaz Patel by on-field umpire Anil Chaudhary on Day 1 of the second Test between India and New Zealand at the Wankhede Stadium on Friday.

Kohli reviewed the call but it was upheld by TV umpire Virendra Sharma, after watching multiple replays. From one angle it seemed as if the ball hit the bat first before hitting the pad. From the other side, it seemed pad, bat and then pad. The TV umpire said that the replays were inconclusive and hence he chose to go ahead with the on-field umpire's decision.

Wasim Jaffer, former India opener, opined via Twitter that he felt it was bat first.

That was bat first in my opinion. And I understand the 'conclusive evidence' part. But I think this was an instance where common sense should have prevailed. But as they say common sense is not so common. Feel for Virat Kohli. #Unlucky #INDvNZ

Sanjay Bangar, former India all-rounder and batting coach, was also surprised by the TV umpire's decision. Speaking to broadcaster Star Sports during the Tea show, he reckoned Kohli had hit it and added, "You can see the deviation, where the ball was going after the impact. Clearly, the ball hit the bat first. Look at that deviation."

"Now, for the ball to come back and hit the pad, it is only because there is something on it. Otherwise, there was no chance that the ball would have come back so much and deviated."

Former New Zealand fast bowler turned commentator, Simon Doull, had a contrasting take. "Everyone in the commentary box thought it hit the pad first and then went back on the bat and then on the pad. So, the decision that Chaudhary made was out, therefore the third umpire has to find conclusive evidence to overturn the decision," he said speaking on the show.

"The images clearly show the ball clipping on the pad first, then going on to the bat then the pad again. The umpires have both got it right. If you see the line of the ball, it can’t hit the bat first because the bat is behind the pad anyway. I think the umpires got it spot on."

Yes, bad decision is part of the game but this one against #Kohli is a Virat blow for Team India. #ViratKohli #CricketTwitter pic.twitter.com/horCCS3L0H