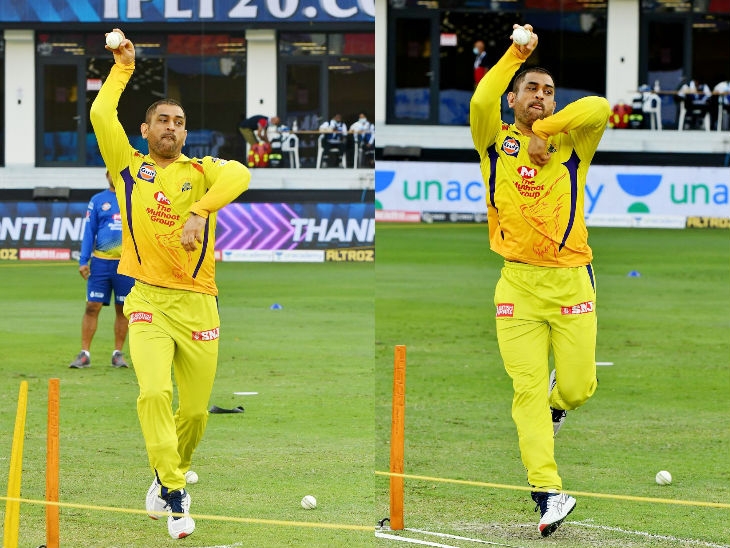 MS Dhoni seems to be enjoying his time in the UAE. The Chennai Super Kings hit the ground up and running by defeating defending champions Mumbai Indians on Saturday in Dubai and they are gearing up for a stiff test against Virat Kohli's Royal Challengers Bangalore in Sharjah on Friday.

On the eve of the big-ticket encounter between the two southern rivals, MS Dhoni found time to have a bowl at the nets. The Chennai Super Kings captain bowled to Ravindra Jadeja and an intriguing battle developed between the two.

MS Dhoni, who has bowled medium pace in competitive matches in the past, tried his hand at spin-bowling on Thursday. In a see-saw battle, Jadeja kept stepping down the track and hitting his captain into the night sky in Sharjah. But Dhoni got back, beating Jadeja's inside edge with a flatter delivery. Dhoni then came over the wicket and castled Jadeja. The all-rounder was looking to heave a fuller delivery into the mid-wicket stands but he missed it and saw his woodwork disturbed. Chennai Super Kings took to social media to share the rare glimpse of Dhoni bowling to Jadeja.

Ravindra Jadeja played a crucial role in Chennai Super Kings' 20-run win over Mumbai Indians. The India all-rounder helped revive their innings after they were reduced to 24 for 4, stitching an 81-run stand with opener Ruturaj Gaikwad as the two helped CSK post 156 in 20 overs.

While Jadeja is one of the most improved batter going around, MS Dhoni would like to have more runs under his belt. The CSK captain looked sharp on Saturday but he hit a short delivery straight into the hands of the deep fine-leg fielder when he was batting on 3 against Mumbai Indians. RCB vs CSK: 5 players to watch out for in today's match