It seemed like Kohli would bring up another double-ton next to his name, but Taijul Islam denied him after his eye-catching catch.
FPJ Web Desk 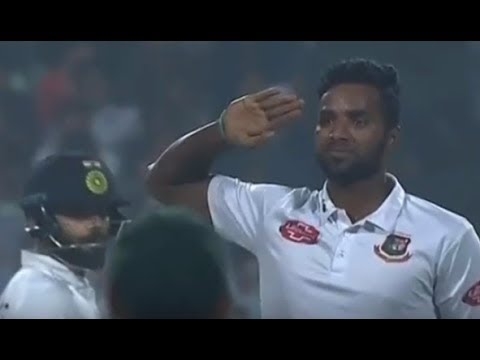 Bangladesh pace bowler Ebadot Hossain got rid of the Indian skipper Virat Kohli, as the bowler marched a salute towards Kohli after he dismissed him in the 81st over. Kohli walked off with a wry smile on his face.

Kohli scored his 27th Test century and became the first batsman from India to hit a hundred in pink-ball Test. His 194-ball century included 18 fours.

It seemed Kohli was inevitable to bring another double-ton, but a breathtaking catch from Taijul Islam denied him the milestone. Ebadat bowled a wide delivery down the leg-slide that was flicked by the Indian skipper, only for Taijul to run and jump towards his right to complete an acrobatic catch at square-leg.

On Day 1, Kohli played his signature shot, the cover drive off Ebadat Hossain and the bowler was very much impressed with that shot applauded the Indian skipper for his excellence.

India are in driver's seat position with a commanding 241-run lead from first innings and will eye to wrap up another game in just three days.