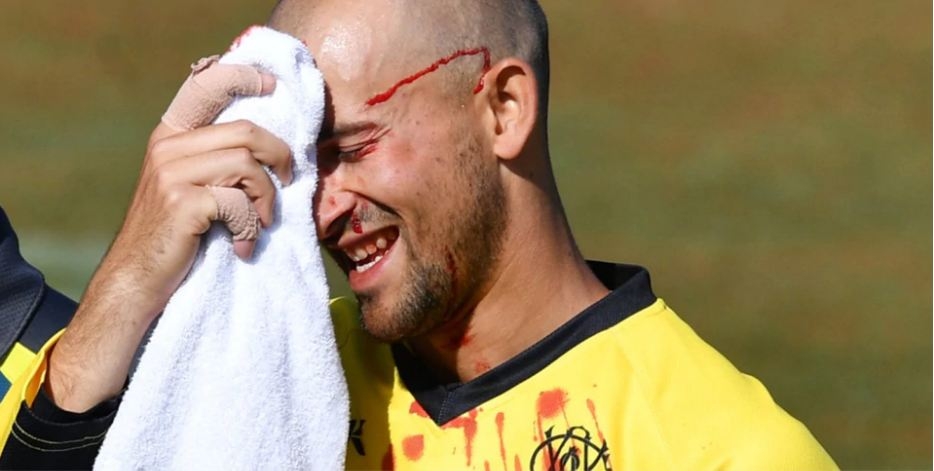 Ashton Agar was treated on the field by team's medical staff immediatel after he fell down after a catch attempt. |

Australian left-arm spinner Ashton Agar saw his nose bleed after he attempted a catch of Wes Agar (his real brother) in a domestic one-day match in Adelaide on Sunday.

Agar suffered a laceration to the bridge of his nose in Western Australia’s Marsh One-Day Cup clash against South Australia after misjudging a catch hit by Wes Agar at Karen Rolton Oval.

Agar, who is considered one of the best Australian fielders, went on to attempt the catch at mid-on but the ball slipped down from his head and targeted the fielder's nose.

Agar’s hat and sunglasses got off his head immediately after the ball collided him, after receiving the treatment he was able to walk off the field while holding a towel to his head.

Later, Wes admitted the incident shook him but was heartened after speaking to his brother post-match.

“He slipped over and the ball hit his glasses and the glasses split him open. The doctor wanted to stitch him up, but he just got engaged so, he said he’ll leave it to a plastic surgeon,” Wes was quoted as saying by cricket.com.au.

“I was pretty rattled. It looked really bad. I was just worrying about his health. I wasn’t thinking about anything else, I just ran out of my crease to go see him. I didn’t feel great, but thankfully he’s okay.”

Agar did not turn back to the field after the injury got him off the field and Western Australia won the match by six wickets.