Virat Kohli: The King of all formats 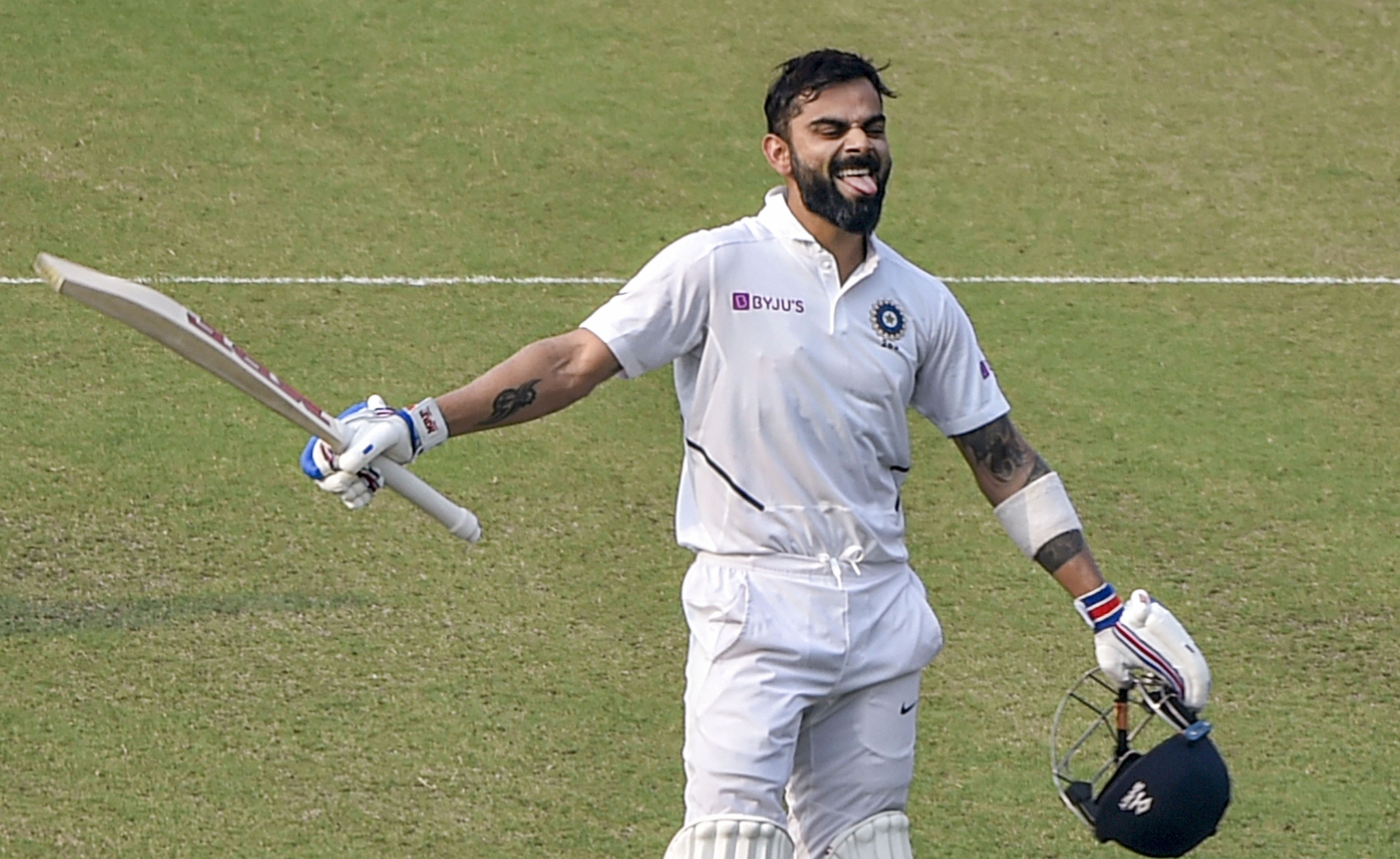 Kolkata: Virat Kohli conjured up a classic hundred in his first tryst with the pink ball while a lethal Ishant Sharma tormented Bangladesh batsmen yet again to push India towards victory in their maiden day/night Test, here on Saturday.

Mostly offering a straight bat to dispatch the swinging pink cherry in the V region, Kohli became the first Indian to score a hundred in a day/night Test, treating the fans with a 136-run knock after starting the day at overnight 59. His deputy Ajinkya Rahane (51) too looked in good touch, striking his fourth successive half-century as India declared their first innings at 347 for nine for a massive 241-run lead.

Bangladesh, who were shot out for 106 in their first essay, were reduced to 13 for four at one stage but the visitors ended the second day at 152 for six, courtesy a combative half-century from Mushfique Rahim (59 batting) and Mahmudullah, who retired hurt after scoring 39.

Mushfiqur smashed 10 fours in his counter-attacking knock as the visitors looked relieved when the Indian pacers struggled to handle heavy dew towards the end. They still trail by 89 runs and need a miracle to save the match.

On 59, Mushfiqur successfully reviewed an lbw decision given by Marais Erasmus as the ball deflected from his glove before hitting the pad in the fag end of the day.

Mahmudullah matched the senior pro but had to walk off due to a hamstring issue after they added 69 runs for the fourth wicket.

Paceman Ishant, who took a five-for in the first innings, blew away the top-order with a three-wicket burst and later added wicket of Mehidy Hasan to be one wicket away from his second 10-wicket haul in a Test match.

Umesh Yadav dismissed Taijul Islam (11) with a short ball in the last over of the day. Ashwin was introduced for the first time in the match and he almost gave a breakthrough in his fourth ball but Rahane dropped Mehidy Hasan at the slip.

Mohammed Mithun became the third Bangladeshi player to be hit on his head when he failed to duck an Ishant bouncer. Already two of their batsmen (Liton Das and Nayeem Hasan) were hit by Mohammed Shami bouncers in the first innings and were replaced according to the concussion protocol.

India started off the second innings with an intimidating slip cordon in four slips and a gully. Ishant gave the breakthrough in the fifth ball, trapping Shadman Islam before Bangladesh could open their account. The gangly paceman returned and sent by rival skipper Mominul Haque, who edged one behind without bothering the scorer.

Earlier, resuming at 59, Kohli looked at his sublime best as he brought up his 27th Test century. He pushed Taijul Islam for a double in the square leg region to bring up his hundred.

Most hundreds in international cricket as captain

A Rahane c Hossain b Islam 51

I Sharma lbw b Al-Amin 0

I Kayes c Kohli b Ishant 5