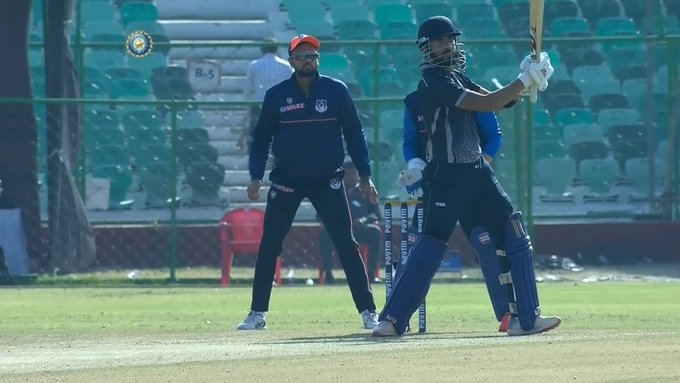 Himachal Pradesh and Tamil Nadu entered the semifinals of the ongoing 2021-22 Vijay Hazare Trophy after defeating Karnataka and Uttar Pradesh in their respective quarterfinal matches on Tuesday.

N Jagadeesan's century and Shahrukh Khan's blazing innings lower down the order helped Tamil Nadu thrash Karnataka by a mammoth 151 runs in quarterfinal 2 to secure a place in the semifinals of domestic 50-over tournament in Jaipur.

Put into bat, Tamil Nadu lost Baba Aparajith early. But, Jagadeesan led the way for the team with his third List A century, scoring 102 off 101, with nine boundaries and a six. During the process, he stitched crucial partnerships of 147 with R Sai Kishore (61 off 71) and 58 with Dinesh Karthik (44 off 37).

Karnataka had a chance to make a comeback in the game after they picked the wickets of Jagadeesan, Karthik and Vijay Shankar in a space of five overs. However, Shahrukh played a counter-attacking knock, smashing an unbeaten 39-ball 79, which included seven fours and six sixes.

Baba Indrajith also played a useful supporting act with a fairly crisp 24-ball 31 as Tamil Nadu posted a total of 354 for 8 in 50 overs.

In reply, Karnataka got off to a poor start as Devdutt Paddikal fell for a second-ball duck - his second successive failure in the tournament. Thereafter, Rohan Kadam and K Siddharth's 59-run stand tried to bring the team back into the game but the innings never gained momentum once the duo was dismissed in quick succession.

Put in to bat, Uttar Pradesh's top four were cleaned up by Vinay Galetiya's triple strike, leaving them reeling at 39 for 4 by the 15th over. However, Rinku Singh revived UP's innings yet again, with two crucial partnerships. He stitched a 64 run stand with Akshdeep Nath and 75 with Bhuvneshwar Kumar. His innings of 76 helped steer Uttar Pradesh to a competitive 207 for 9.

In reply, Himachal opener Shubhnam Arora was dismissed for 19 in the 18th over of the innings. From there, Prashant Chopra and Nikhil Gangta stitched a 122-run stand for the second wicket.

Ankit Rajpoot struck twice in the 38th over but by then the game had already slipped away by then for Uttar Pradesh. Shivam Mavi also picked a couple of more wickets, but it did little to halt Himachal as they chased the target in 45.3 overs.