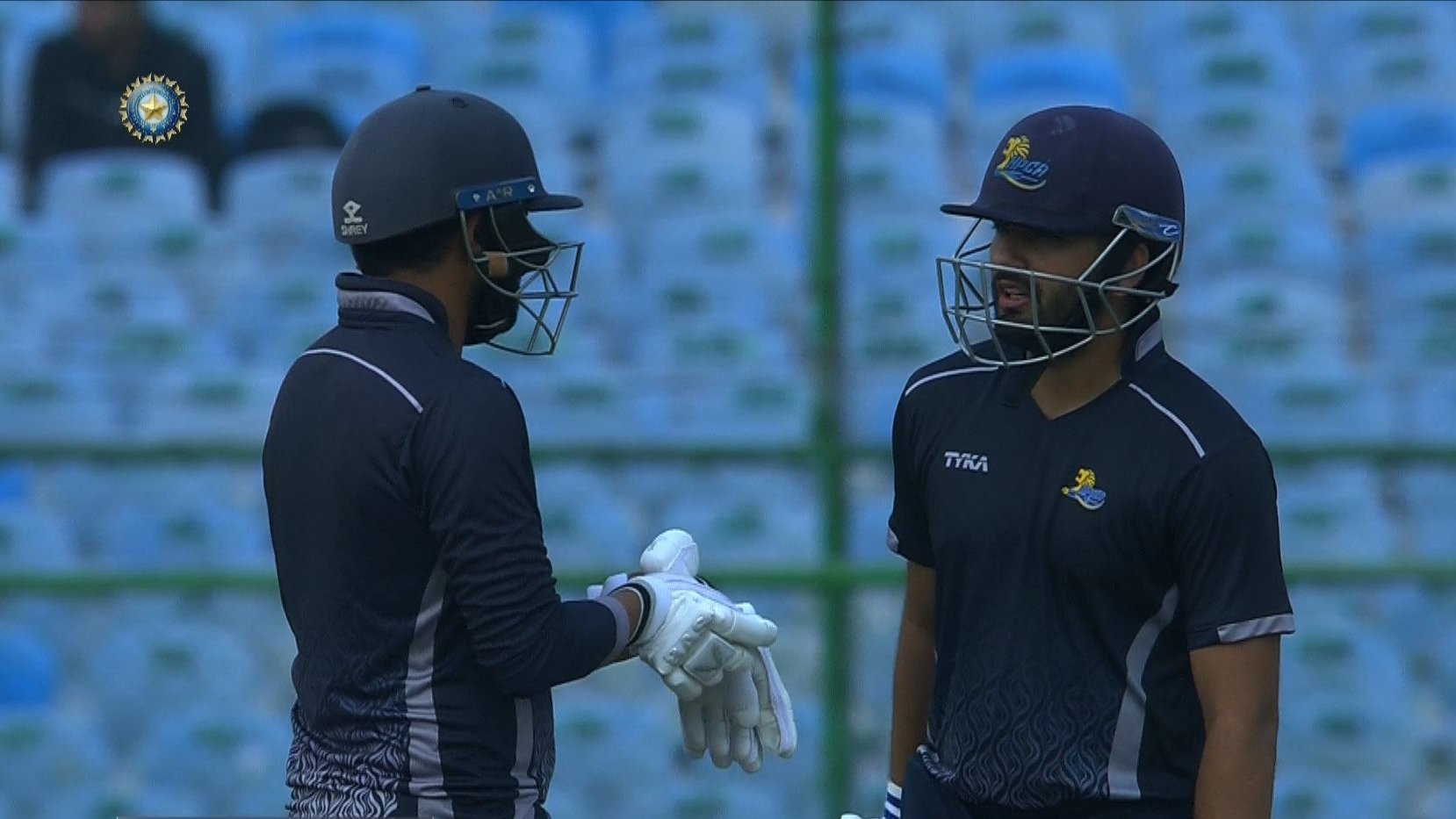 Shubham Arora and Amit Kumar during their partnership for Himachal Pradesh against Tamil Nadu in the Vijay Hazare Trophy final. | Photo: BCCI

Himachal Pradesh stunned Tamil Nadu to win their first Indian domestic title to lift the Vijay Hazare Trophy at the Sawai Mansingh Stadium in Jaipur on Sunday. Shubham Arora struck an unbeaten ton and added 148 with Amit Kumar (74) for the fourth wicket.

Himachal Pradesh captain Rishi Dhawan won the toss and chose to bowl first. His decision proved to be the right one as Vinay Galetiya dismissed Tamil Nadu opener Baba Aparajith for just 2 in the 5th ball of the match.

Dhawan introduced himself in the first change and dismissed the other opener Narayan Jagadeesan caught behind by wicket-keeper Arora for just 9. Ravisrinivasan Sai Kishore tried to steady the ship for Tamil Nadu but he too was dismissed by medium-pacer Pankaj Jaswal.

Dhawan took his second wicket of the match as he got the wicket of Murugan Ashwin for 7 and Tamil Nadu were left tottering for 40 for four in 14.3 overs.

With Tamil Nadu in deep trouble team's most experienced batter, Dinesh Karthik came in and forged a much-needed partnership with Baba Indrajith. The duo steadied the ship and slowly increased the current run rate of the team. Both the batters targeted the left-arm spinners Mayank Dagar and Akash Vasisht as they conceded runs with over 7 runs per over.

Karthik notched up his century and Indrajith scored a half-century as the duo went on to put 202-run partnership for the fifth wicket. Digvijay Rangi was introduced into the attack and even he went for plenty conceding 35 runs in three overs at an economy rate of 12.66. But Rangi finally broke the partnership dismissing Baba Indrajith for 80 of just 71.

In the next over Karthik too was dismissed after playing a brilliant knock of 116 of 103 balls smashing 8 boundaries and 7 sixes at a strike rate of 112.62. Karthik was dismissed by Sidharth Sharma who bowled an economical spell of 34 for 1 in his 10 overs.

Shahrukh Khan came in to bat and he wreaked havoc on Himachal bowlers hitting three sixes and three boundaries scoring 42 runs of 21 balls. Captain Vijay Shankar also scored runs at a brisk pace scoring 22 runs of 16 balls hitting one six and one boundary and in-process took his team's total beyond the 300-run mark.

Chasing 315, Himachal Pradesh got off to a flying start as openers Arora and Prashant Chopra put on 60 runs for the opening wicket in just 8.5 overs. Left-arm spinner Sai Kishore was introduced into the attack and he dismissed Chopra out bowled for just 21.

In the next over Washington Sundar cleaned up Rangi for a three-ball duck. Nikhil Gangta came in and he hit 2 sixes but was dismissed by Ashwin for 18 as Himachal looked in a spot of bother at 96 for three.

Kumar walked in to bat and forged a partnership with wicket-keeper batter Arora. Amit Kumar scored a half-century of 57 balls. Arora notched up his maiden century in List A cricket which came of just 95 balls as Himachal's total went past the 200-run mark and the duo also struck a century partnership.

The 148-run partnership was finally broken by Aparajith dismissing Kumar for 74 of 79 balls. Dhawan walked in and he went berserk hitting boundaries and sixes as the required run-rate had gone up over 8 runs per over.

Dhawan's blistering knock meant Himachal needed only 38 runs of 6 overs. With 16 needed of 15 balls for Himachal, the poor weather interrupted the play. As per the V Jayadevan method Himachal were 11 runs ahead and were awarded the match.