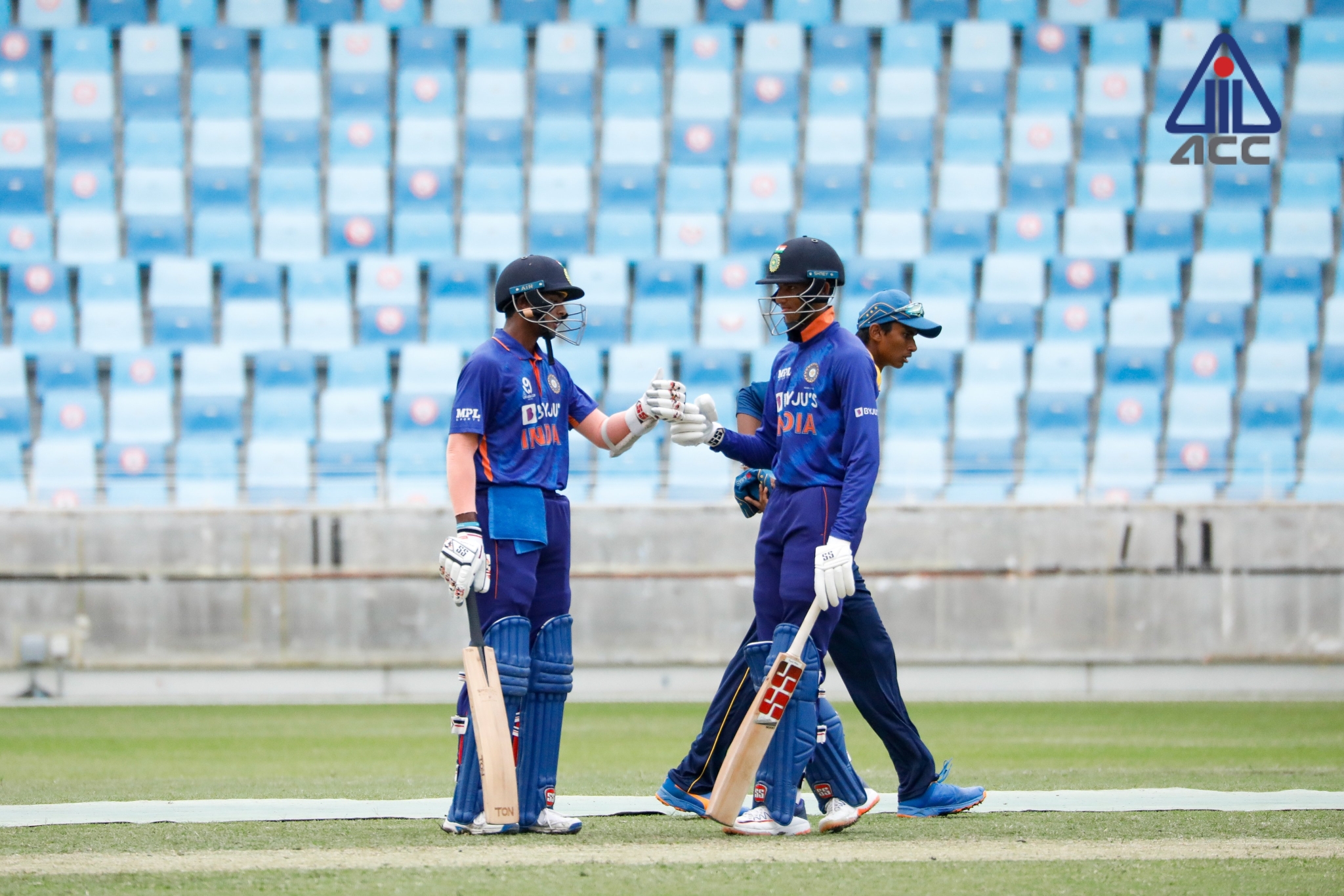 Shaik Rasheed (l) and Angkrish Raghuvanshi during their partnership for India U-19 against Sri Lanka U-19. | Photo: Twitter

India U19 routed Sri Lanka U19 by nine wickets to win the Under-19 Men's Asia Cup in Dubai on Friday. The bowlers kept Sri Lanka U19 for a mere 106 for nine before India U19 got home via DLS methods, thanks to Shaik Rasheed and opener Angkrish Raghuvanshi's unbeaten 96-run partnership.

The Indian bowlers were all over Sri Lanka U19, who were gasping at 74 for seven in 33 overs, when heavy rain lashed the Dubai International Cricket Stadium and stopped play for more than two hours.

It became a 38-over-a-side contest when play resumed with Sri Lanka U19 limping to 106 for nine.

India U19 were set a revised 102-run target in 38 overs via DLS method which they reached rather comfortably in 21.3 overs with opener Raghuvanshi scoring an unbeaten 56 off 67 balls.

India U19's only loss in the competition came against arch-rivals Pakistan U19, who lost to Sri Lanka U19 in the semifinals.

The tournament provided valuable game time for the Yash Dhull-led side ahead of the U-19 Men's World Cup, beginning in the West Indies from January 14.

After tournament's leading scorer Harnoor Singh departed cheaply in the chase, Raghuvanshi played sensibly alongside Shaik Rasheed (31 not out off 49) to get the job done.

The opener, who could not make an impact in the earlier games, grew in confidence after playing a backfoot punch early on in the innings. His backfoot play was impressive against the pacers and his feet movement against the spinners was assured. Raghuvanshi's innings comprised six boundaries.

Earlier, Sri Lanka U19 opted to bat though early morning showers made conditions ideal for seam bowling first up.

The Indian pace duo of Rajvardhan Hangargekar and Ravi Kumar made the ball talk though the former was a tad unlucky to not get a wicket.

Left-arm pacer Ravi got the first wicket of the match by removing Chamindu Wickramasinghe in the fourth over. The left-hander opener went for a big hoick over mid wicket but ended up mistiming it straight into the hands of Raj Bawa at third man.

Wickramasinghe's opening partner Shevon Daniel tried to pull Bawa but the ball got big on him, taking a faint edge to wicketkeeper Aaradhya Yadav to leave Sri Lanka U19 at 15 for two in the 11th over.

India U19 looked a far superior team. Hangargekar was the most impressive pacer in the first 10 overs, generating good pace that hurried the batters besides extracting movement off the pitch.

The Sri Lanka U19 batters looked completely at sea against the Indian bowlers, be it fast bowlers or the spin pairing of Kaushal Tambe (2/23) and Vicky Ostwal (3/11). Both off-spinner Tambe and left-arm spinner Ostwal got the odd ball to turn sharply.

Ostwal got two in one to leave Sri Lanka U19 in dire straits at 57 for seven. Southpaw Dunit Wellagle attempted a slog sweep to break the shackles but ended up getting caught in the deep.

Two balls later Ranuda Somarathne missed Oswal's arm ball on the back foot, trapping him in front of the stumps.

With India U19 set to bowl out Sri Lanka U19 for a sub-100 total, heavy rain stopped play.