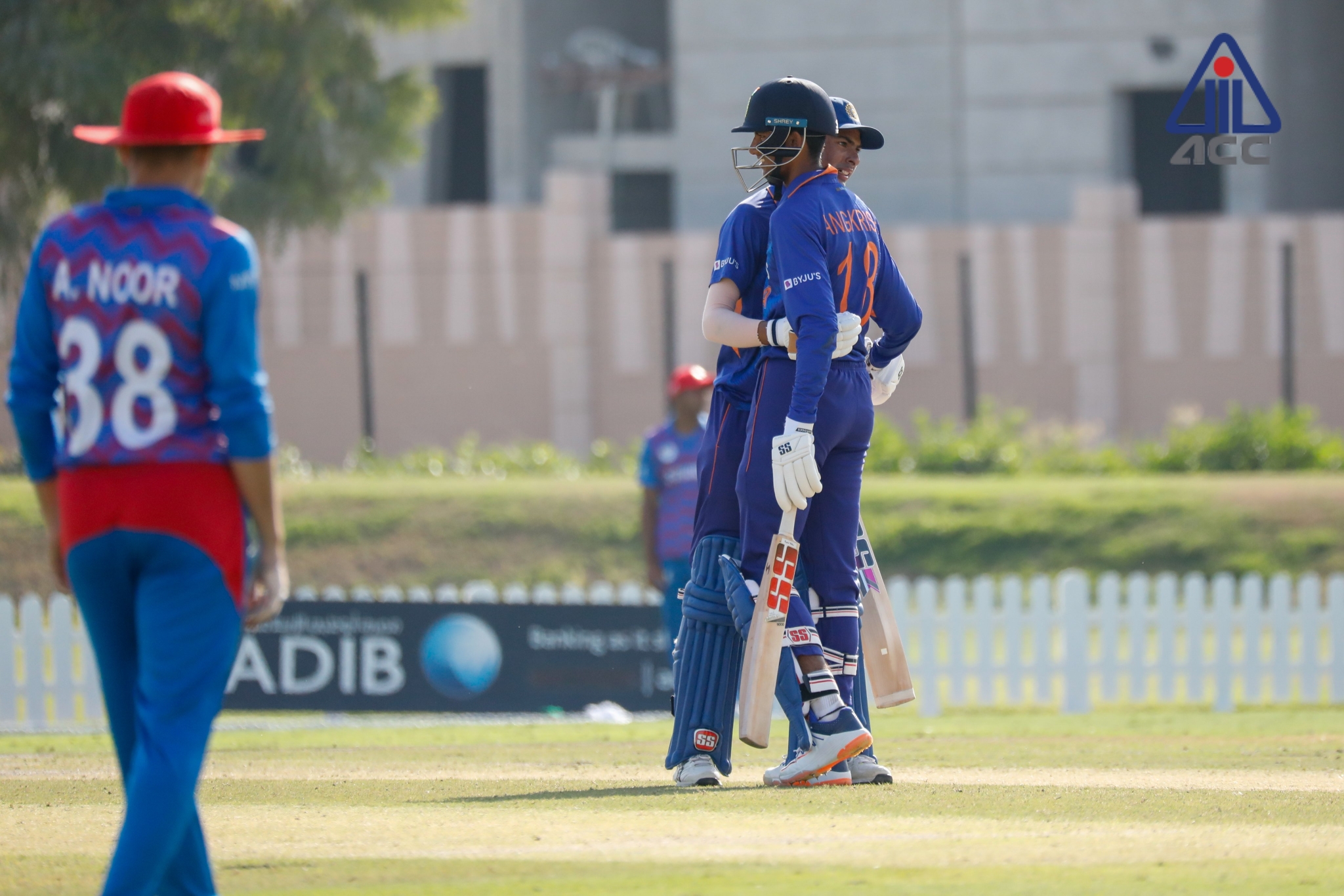 India U19 openers against Afghanistan U19. | Photo: ACC

A match-winning 65-run seventh wicket stand between Raj Bawa and Kaushal Tambe ensured a fighting four-wicket victory for India over a gritty Afghanistan as they entered the semi-final of the U-19 Asia Cup tournament in Dubai on Monday. Bawa (43 not out) and Tambe (35 not out) joined forces when India were in trouble at 197 for six but they kept calm to take the 'Boys in Blue' to their required 260-run target with 10 balls to spare.

This was after in-form opener Harnoor Singh (65) and his partner Angkrish Raghuvanshi (35) added 104 for the opening stand. However, the middle order caved in with skipper Yash Dull (26) and Nishant Sindhu (19) failing to convert starts. It was left to Bawa and Tambe to take the team home.

With this win, India were placed second in the group behind Pakistan, which won all their matches.

India will face the winners between Bangladesh and Sri Lanka, who are pitted against each other in the last group league encounter. With India finishing second, they would meet the toppers of the other group in the semi-final.

It was a game where India returned to winning ways.

Chasing 260, Singh, who hit nine boundaries and Angkrish were off to a flyer as India raced to 44 for no loss in six overs. It was raining boundaries at the ground, with the two openers hammering the Afghan attack with utmost ease.

India were cruising at 74/0 after 12 overs. However, Raghuvanshi was trapped in the front by left-arm unorthodox spinner Noor Ahmad (4/43) as he broke the 104-run opening stand.

India slipped to 116/3, as Afghanistan removed Singh and Shaik Rasheed (6) cheaply. Then skipper Dhull and Sindhu tried to take the game deep, but Khalel Ahmadpegged back India by removing Sindhu with India reeling at 162/4.

Then Noor got his third, after Ishaq stumped Dhull in the 36th over, as India lost half their side for 183. Noor then trapped Aaradhya Yadav (12) to leave India teetering at 197/6.

Bawa and Tambe had an enormous task at hand but they forged a match-winning stand to take their side to the last four stage with Tambe fittingly finishing the game with a boundary.