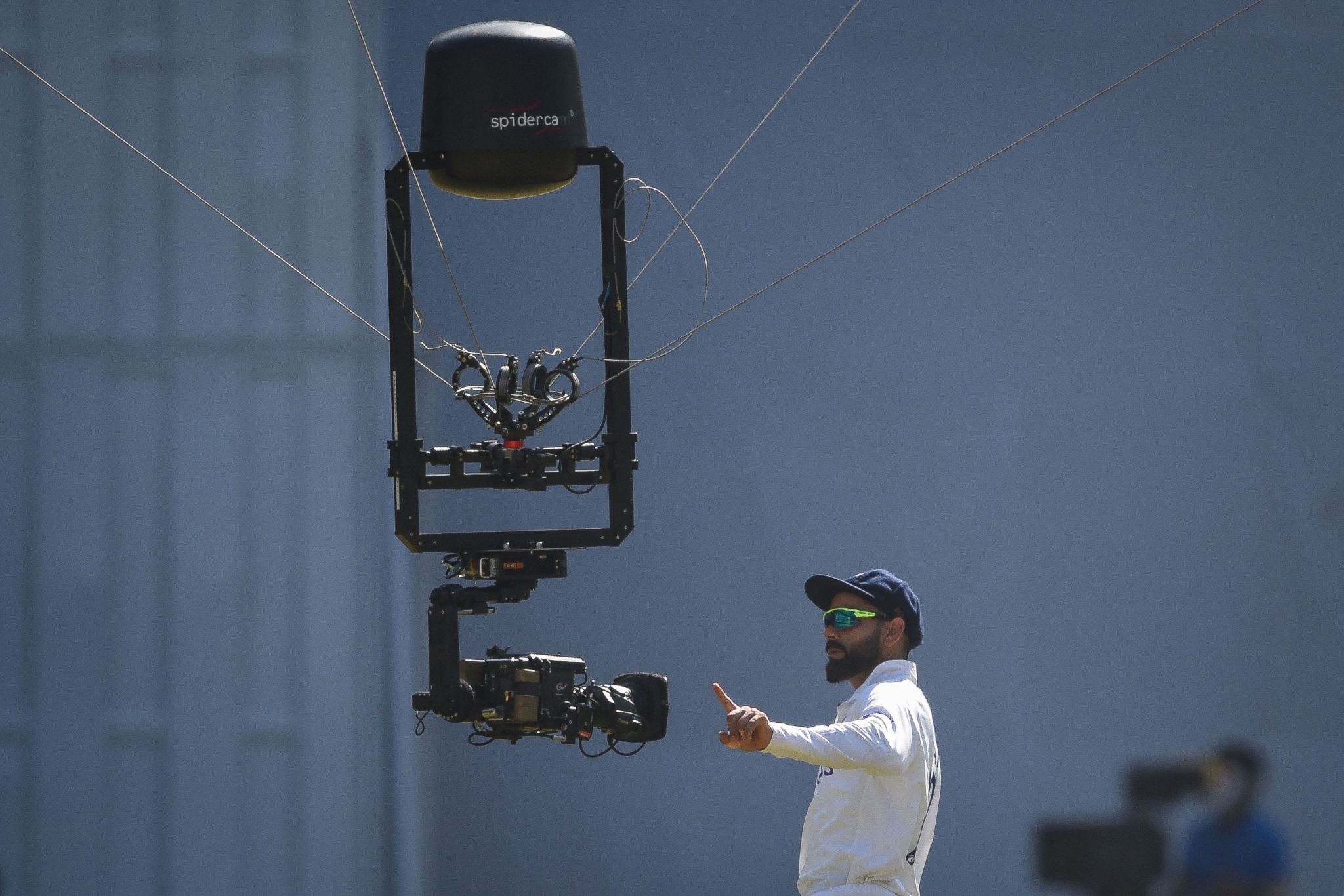 Virat Kohli reacts to the spidercam that was stuck during the Mumbai Test against New Zealand. | Photo: AFP

Virat Kohli has 70 centuries across formats in international cricket so far. The wait for a 71st has been quite long. But off it, he’s almost hit one on his own, when he addressed the media in a virtual press conference ahead of India’s departure to South Africa on Wednesday.

Last week, Kohli was replaced by Rohit Sharma as the ODI captain. It was a call waiting to happen once he relinquished T20I captaincy. Sourav Ganguly, the BCCI president, had last week claimed that the board had asked Kohli not to leave T20I captaincy and that he did so on his own.

“Whatever was said about the communication that happened about the decision that was made was inaccurate,” said Kohli.

“I was contacted one and half hours before selection meeting on (December) 8th for Test series and there was no prior communication to me at all since I announced my decision on T20 captaincy. The chief selector discussed the Test team to which we both agreed.”

“Before ending the call, I was told that the five selectors have decided that I will not be the ODI captain to which I replied 'okay fine'.”

There was more clarification to follow from Kohli, when probed about his intention to continue leading the one-day outfit till the Men’s World Cup at home in 2023.

“I gave the reasons why I wanted to quit T20 captaincy and my view point was received very nicely. There was no offence, no hesitation and not for once was I told that 'you should not leave T20 captaincy’,” added the Test captain.

“On the contrary, the BCCI called it a progressive step and in the right direction. At that time, I had communicated that, yes, I would like to continue in Tests and ODIs unless office-bearers and selectors think that I shouldn't carry on with this responsibility.”

"I had clarified on my call and communication to BCCI was clear. I had given that option if office bearers and selectors think otherwise, then it's in their hands ,” Kohli added.

With a win percent of 70.43 as India’s ODI captain, Kohli had reasons to be miffed with the manner of his sacking. That he was open to moving on, going by his words, should have resulted in BCCI doing it in a better way.

While the miscommunication is not entirely new for the BCCI, this case of washing dirty linen in public is quite unprecedented. This is a case of a captain standing up and speaking out, against the board and the selectors.

Kohli of late has been unafraid of speaking his mind out, especially if it benefits him or the team or his team-mates. During the Men’s T20 World Cup, he spoke in support of pacer Mohammed Shami, who received massive hate following India’s defeat to Pakistan for the first time in ICC tourneys.

However, it is to be recalled that the last Indian captain to have been sacked without notice was Ganguly himself, in 2005, with Rahul Dravid, the current head coach, taking over.

Hopefully, the 71st ton on field comes in the Rainbow Nation for Kohli, who could play his 100th Test in Cape Town.