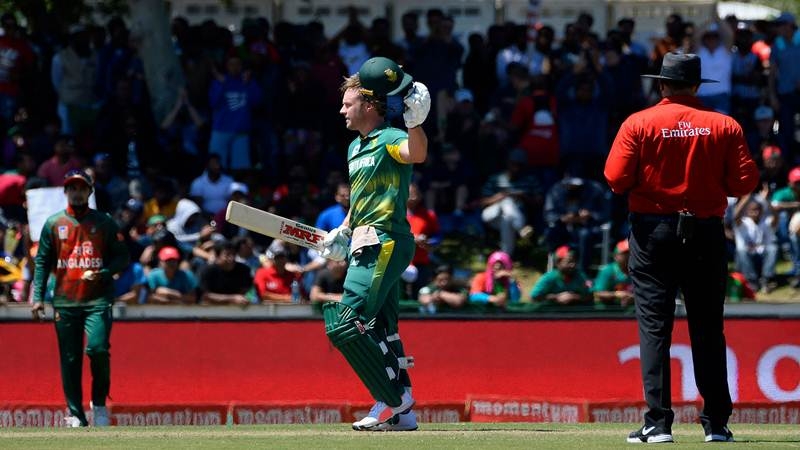 Former South Africa captain AB de Villiers, who had retired from international cricket in 2018, called it quits from all cricket on Friday. The Protea last played for Royal Challengers Bangalore in the UAE leg of IPL 2021. He led South Africa in three Tests, 103 ODIs and 18 T20Is in a career spanning 13 years.

Here’s taking a look at some of his breathtaking knocks in international cricket as a captain.

30(13) in T20I vs SL, 2012: The Men’s T20 World Cup in 2012 was de Villiers’ first as South Africa captain. Against Sri Lanka in a rain-hit encounter, South Africa were batting first in a seven overs-a-side contest. The openers were back in the hunt by the third over with just 27 runs on the board. In walked de Villiers and scored 30 off just 13 balls, helping Proteas score 78, which proved to be sufficient.

69*(28) in T20I vs ENG, 2014: In the first match of the Men’s T20 World Cup in 2014, South Africa had lost Hashim Amla in the 11th over after a good start. De Villiers, captaining the side, walked in and scored 69 runs off just 28 balls. He hit nine fours and three sixes and had a strike rate of 246.42. It was the fastest fifty for the Proteas in the competition and assured them of a spot in the semi-finals.

162*(66) in ODI vs WI, 2015: On a slow, two-paced wicket at the Sydney Cricket Ground, de Villiers put on a show that was second to none. He scored the fastest 150 in ODI cricket and helped South Africa score 261 runs in the last 20 overs. He finished 162 not out and reserved special treatment to Jason Holder, whose ten overs went for 104.

65*(45) in ODI vs NZ, 2015: It was the semi-final of the Men’s Cricket World Cup 2015. In just above halfway stage, South Africa were three down for 114, when de Villiers walked out. He first added 103 with Faf du Plessis and then proceeded to add perfect finishing touches to South Africa’s innings finishing unbeaten.

119 (61) in ODI vs IND, 2015: At the Wankhede Stadium in the deciding match of the series, de Villiers’ assault changed the face of the South African innings. He struck a fifty off just 34 balls before finishing a ton off 57, helping South Africa post a score over 400 against India in India.