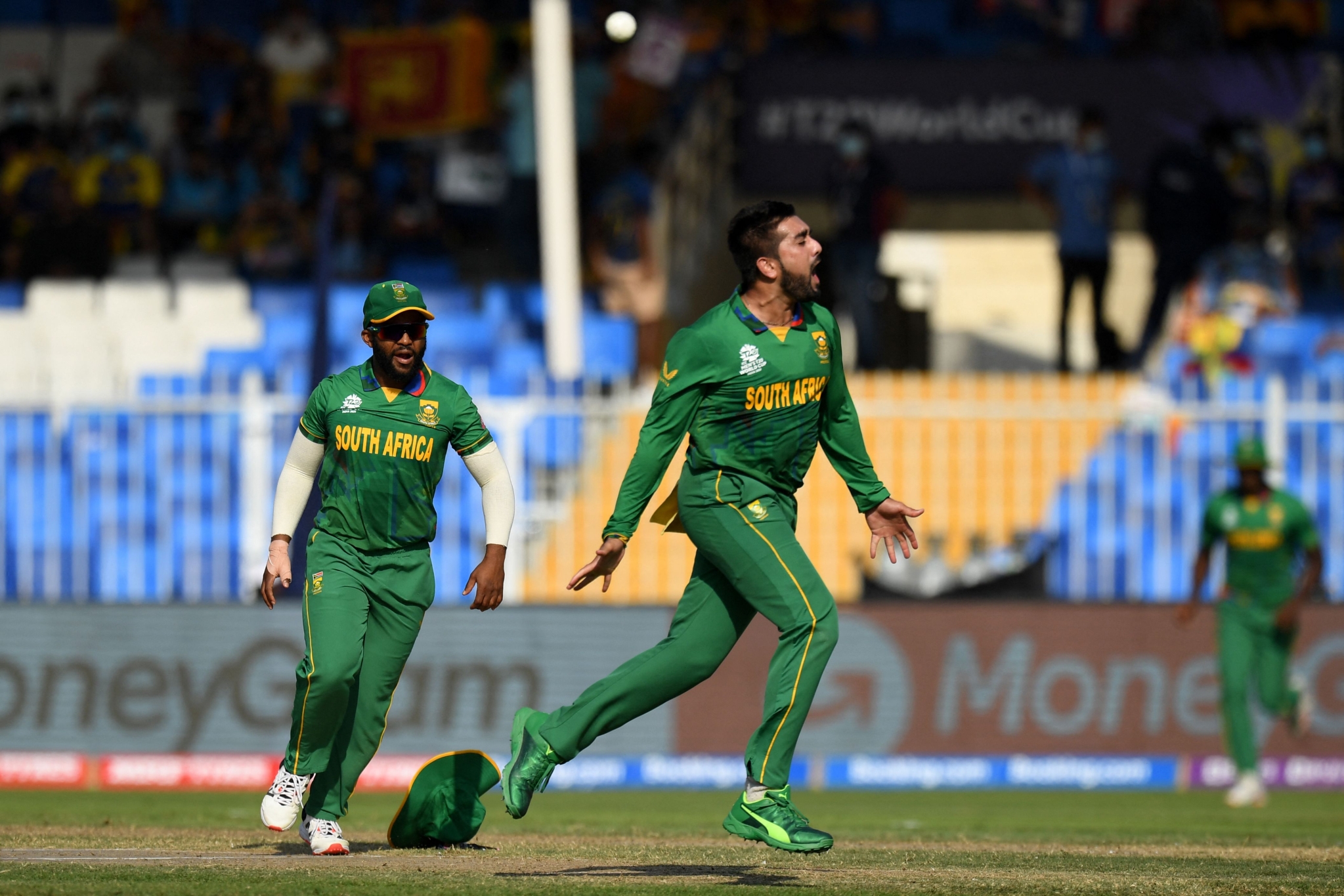 Tabraiz Shamsi of South Africa roars in celebration after picking up a wicket in the T20 World Cup. | Photo: AFP

Left-arm wrist spinner Tabraiz Shamsi spun his web around the Sri Lankan batters as South Africa bundled them out for 142 despite opener Pathum Nissanka's whirlwind 72 in a Super 12 T20 World Cup game in Sharjah on Saturday.

On a track that aided spinners, Shamsi rattled the Sri Lankan middle-order to return with fine figures of 3/17 and his scalps included Bhanuka Rajapaksa (0), Avishka Fernando (3) and Wanindu Hasaranga (4).

The 23-year-old Nissanka was the lone Sri Lankan to shine with the bat, hitting 72 off just 58 balls, with six fours and three sixes.

Pacer Anrich Nortje cleaned up Perera, as Sri Lanka lost their first wicket with 20 on the board.

Then in-form Charith Asalanka (21) joined Nissanka, as the duo tried to rally the innings with their 41-run stand.

Asalanka struck two successive fours in the sixth over off Nortje, including a straight drive, as Sri Lanka fetched 13 runs from it and cantered to 39/1 after the powerplay.

After a couple of slow overs, both Asalanka and Nissanka freed their arms, hammering a six each in the 9th over off Keshav Maharaj (0/24).

But then South African pegged back the host by scalping four quick wickets.

First Rabada's brilliance in the field meant that Asalanka was run out and in the next over Shamsi lobbed a return catch of his own bowling to dismiss Rajapaksa to leave the opposition tottering at 62/3.

Shamsi, in a similar fashion, removed Fernando as they further slipped to 77/4. Shamsi got his third when he dismissed Hasaranga. Skipper Dasun Shanaka's (11) horrid form also continued.

Nissanka, who hit his second T20 half century, however continued playing his shots and took on the SA attack with gusto, but South African speedster Dwaine Pretorius (3/17) rattled the lower order.