New Zealand and Australia have never won the Men's T20 World Cup and their semi-final wins had quite a few uncanny similarities
S. Sudarshanan 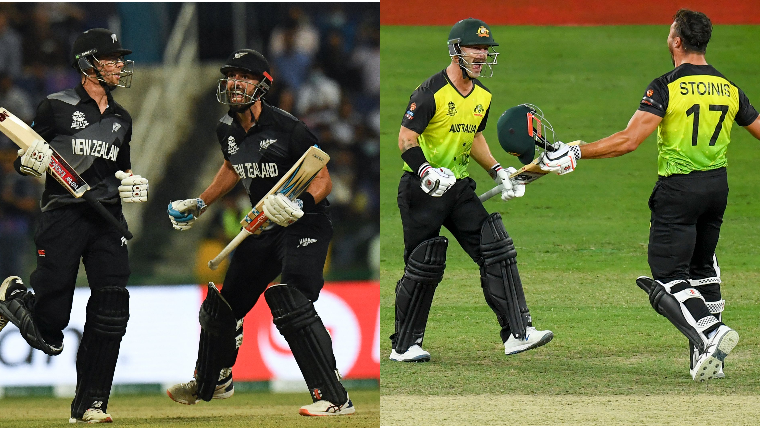 Left to right: Mitchell Santner and Daryl Mitchell of New Zealand, Matthew Wade and Marcus Stoinis of Australia celebrate after the win in the semis of the Men's T20 World Cup. | Photo: AFP

A double-bouncer by Mohammad Hafeez was smashed over the deep mid-wicket fence by David Warner, who was aware that it was a no ball. Warner was aware and smart.

Daryl Mitchell before James Neesham - 45 off 36; Mitchell with and after Neesham - 27 off 11. Mitchell was dogged and smart.

Awareness and doggedness combined with a bit of smartness helped New Zealand and Australia win their respective semi-final clashes of the Men’s T20 World Cup 2021. That meant favourites England and Pakistan were knocked out and that the competition will have a new winner. While the trans-Tasman teams did the unthinkable - that of knocking two of the pre-tournament favourites out - there were a lot of similarities in they way it happened.

With four overs left in the chase, New Zealand had left themselves a lot to do, with Mitchell hardly able to time the ball in the company of Neesham who had just faced a ball.

Not that Mark Wood was economical, but his extra pace could perhaps have unsettled New Zealand, who were fed Chris Jordan, Adil Rashid and Chris Woakes at the death. But Wood’s quota was done by the 15th over.

That England would have dearly loved to have a Jofra Archer or a Liam Plunkett-like bowler in the middle overs is no secret. Result? Jordan went for 23 in the 17th over, England’s most expensive in the entire tournament, which turned the match decisively in the Kiwis favour.

Australia were already behind the eight-ball having lost half their side under hundred. Marcus Stoinis and Matthew Wade merely kept Australia afloat, with runs being hard to come by.

Haris Rauf was quite a revelation in the Men’s T20 World Cup, picking up eight wickets. He has been clever with his change of pace as well as lengths. However, he gave away 13 in the 17th over, with Stoinis hitting him for a four and a six, before a similar treatment was meted out to Hasan Ali in the next over by Wade.

New Zealand needed 20 off the last two overs, which were duly scored in the penultimate over, while Wade polished off the 22 needed off the final 12 balls in just six. Both the Oceanian sides won with five wickets and an over to spare.

While Mitchell and Neesham’s role in New Zealand’s win was massive, Devon Conway was the silent hero, whose 46 off 38 helped them stay afloat after the initial setbacks. For Australia, Warner’s 49 off 31 helped set a platform for the final assault by Stoinis and Wade, not least by keeping them abreast of the required rate till halfway in the chase.

And so, there were uncanny similarities in both the cliff-hangers - the side that won the toss, opted to chase, did so in exactly 19 overs losing five wickets, with three batters playing crucial roles and with a left-right combo in the middle at the end.

Last time Australia and New Zealand met in the final of an ICC event - 2015 Men’s World Cup - it was an anti-climactic end with the former emerging victorious. There are enough signs that the title-clash on Sunday might not be kind on our fingernails.