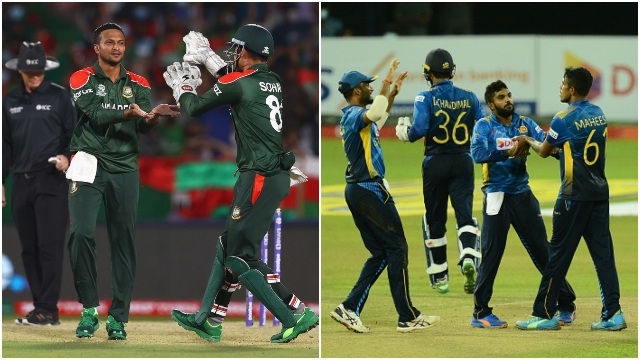 Sri Lanka will rely heavily on their bowling unit to make up for their relatively weak batting department, while Bangladesh would look for consistency when the two teams clash in a Super 12 Group 1 match of the T20 World Cup here on Sunday.

Both Sri Lanka and Bangladesh had to go through the first round group stage to secure their places in the Super 12s. While Sri Lanka topped Group A with three wins out of as many games, Bangladesh finished second in Group B behind Scotland.

Sri Lanka defeated Namibia by seven wickets, before beating Ireland by 70 runs. In their last qualifying match against Netherlands, they skittled out the opposition for 44 and then accumulated the runs with eight wickets in hand.

Bangladesh, on the other hand, were far from impressive. The Tigers were stunned by Scotland by six runs in their opener before they scrapped past Oman by 26 runs and then defeated Papua New Guinea by 84 runs to qualify for the Super 12s.

But the road ahead would be tough for both Sri Lanka and Bangladesh. The two teams will have to go past the challenges of fellow Group 1 sides England, Australia, defending champions West Indies and South Africa if they wish to go deeper into the tournament.

Going forward in the tournament, Sri Lanka will have to deal with their stuttering top-order.

After successive failures against Namibia and Ireland, Dinesh Chandimal lost out his place to Charith Asalanka, who didn't help his cause either, scoring just 6 in the low-scoring game against Netherlands.

On the bowling front, the pressure would be high on pace trio of Lahiru Kumara, Chamika Karunaratne and Dushmantha Chameera to deliver the goods. Maheesh Theekshana's back strain ruling him out of the clash means that Wanindu Hasaranga will have to assume a bigger role in the spin department.

Just like Sri Lanka, Bangladesh too have a shaky batting order to deal with. The shock loss to Scotland and scrappy win against Oman highlighted the lack of confidence among their batters.

In Mohammad Naim, Liton Das and Afif Hossain, Bangladesh have some talented batters up the order but the mantle of guiding the side remains largely on the shoulders of veterans Shakib Al Hasan, skipper Mahmudullah and Mushfiqur Rahim.

But Bangladesh's main weapon is the spin department, led by willy Shakib and Mahedi Hasan.

For Bangladesh, the T20 World Cup has not been a happy hunting ground. After their success in the inaugural edition in 2007, when they made it to Super 8s, the Tigers failed to register a single win in the 2009, 2010 and 2012 editions.

Bangladesh returned to winning ways in 2014 when the event was expanded to 16 teams, topping Group A in the first round only to lose all four matches in the Super 10 stage. It was a similar story in 2016, where they crashed out after a devastating loss to India.

But going by recent form, Bangladesh entered the tournament with nine T20I wins in the calendar year, only behind South Africa who have 12.

Barring the loss against Scotland, it has been a good build up to the event for Bangladesh.

In fact, since losing to New Zealand in March away from home, Bangladesh have registered series wins over Zimbabwe (2-1), Australia (4-1) and New Zealand (3-2).