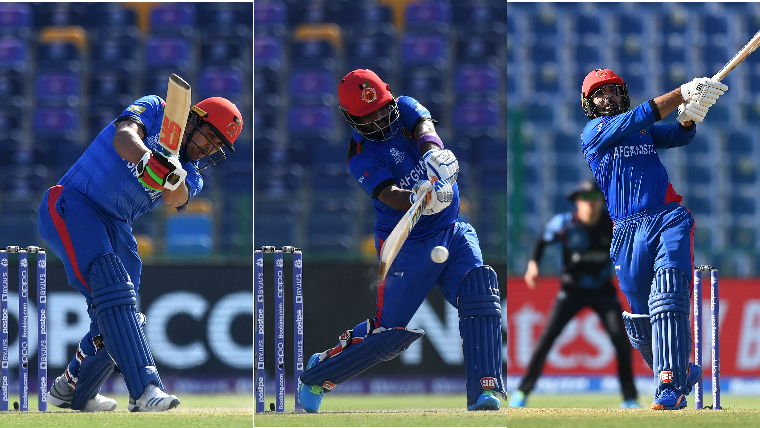 From left to right: Hazratullah Zazai, Mohammad Shahzad and Mohammad Nabi in action for Afghanistan in the T20 World Cup. | Photo: AFP

Mohammad Shahzad scored 45, added 53 with Hazratullah Zazai for the opening wicket while Asghar Afghan scored 31 before a cameo from Mohammad Nabi of 32 not out off just 17 balls helped Afghanistan post 160 for four against Namibia in their Super 12 match of the T20 World Cup in Abu Dhabi on Sunday.

Afghanistan made a strong start, reaching to 50/0 at the end of powerplay, with the opening pair of Hazratullah Zazai (33) and Mohammad Shahzad (45) sharing a 53-run stand in 6.4 overs after opting to bat.

But Afghanistan fizzled out after that as wickets fell at regular intervals and there was no substantial partnership. They recovered a bit towards the end, scoring 51 from the last five overs, thanks to Afghan.

The 33-year-old right-handed batter, who was earlier known as Asghar Stanikzai, has played six Tests, 114 ODIs and 75 T20Is after making debut in 2009.

In his last game for the country, he provided good support to current captain Nabi and their quick-fire 35-run stand took the team's total past 150-run mark.

Zazai was the more aggressive of the opening duo. He began with a six and a four in the opening over bowled by Ruben Trumpelmann and then added three more boundaries and another maximum in the powerplay.

But just as he was looking ominous, Zazai was out in the seventh as he holed out to deep square leg fielder off JJ Smit in the seventh over. One-down Rahmanullah Gurbaz did not last long as he was out for 4 in the 10th over, trapped LBW off the bowling of Jan Nicol Loftie-Eaton.

The run-rate dropped as Afghanistan reached to 69 for 2 at the halfway mark and after a relative lull, set opener Shahzad opened up to hit a four and a six in the 11th and 12th overs.

Shahzad was, however, out in the 13th over as he top-edged Trumpelmann for Bernard Scholtz to take a simple catch. He hit three fours and two sixes during his 45-run knock.

Afghanistan took 13 runs from the 15th over bowled by Jan Frylinck with Afghan clobbering him for a six but they lost the momentum once again as Najibullah Zadran (7) was out at the other end.

Afghan was out in the penultimate over as he holed out to Michael van Lingen at backward point off Trumpelmann. He hit three fours and one six. Several Namibia players shook hands with Afghan while he walked off the ground.