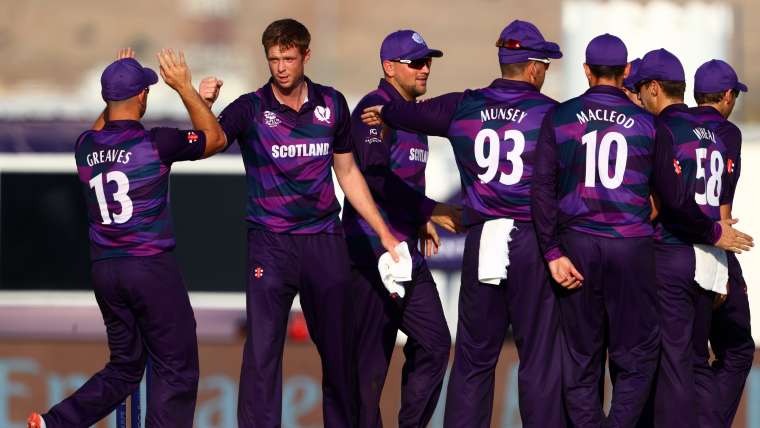 Scotland celebrate the fall of a wicket. | Photo: Twitter/T20WorldCup

Norman Vanua’s valiant 47 was the only saving grace for Papua New Guinea, apart from the 4/31 from Kabua Morea as Scotland won their second successive game in the T20 World Cup on Tuesday at the Al Amerat. By virtue of the 17-run win, Scotland strengthen their top spot in Group B.

Scotland seamer Josh Davey was too hot to handle for PNG, who lost four wickets to him. He began by castling opener Tony Ura (5) in his first spell, before coming back later to add the wickets of Simon Atai (2), Chad Soper (16) and Vanua. Brad Wheal and Alasdair Evans also struck early as PNG were reduced to 35/5 in their 166-run chase.

That is when Vanua walked in. He first added 32 with Sese Bau (24) before a 53-run seventh-wicket partnership with wicketkeeper-batter Kiplin Doriga (18). Vanua cut loose as he hit two fours and two sixes in his 50-minute stay in the middle. However, PNG could offer no competition to a strong Scotland unit, that beat Bangladesh in their opening clash and were bowled out for 148.

Earlier, opting to bat first, Scotland posted 165/9, thanks mainly to Richie Berrington, who scored an attacking 70, and Matthew Cross. The pair added 92 for the third wicket after being reduced to two for 26. While Cross made 45 and missed his half century, Berrington scored his sixth in T20Is to lay platform for a strong Scottish finish.

However, the men in purple lost six wickets in the last 11 balls to go from three for 151 to nine for 165. Kabua Morea’s final over saw four wickets fall, including a run out. Morea finished with four wickets for 31 runs in his quota.