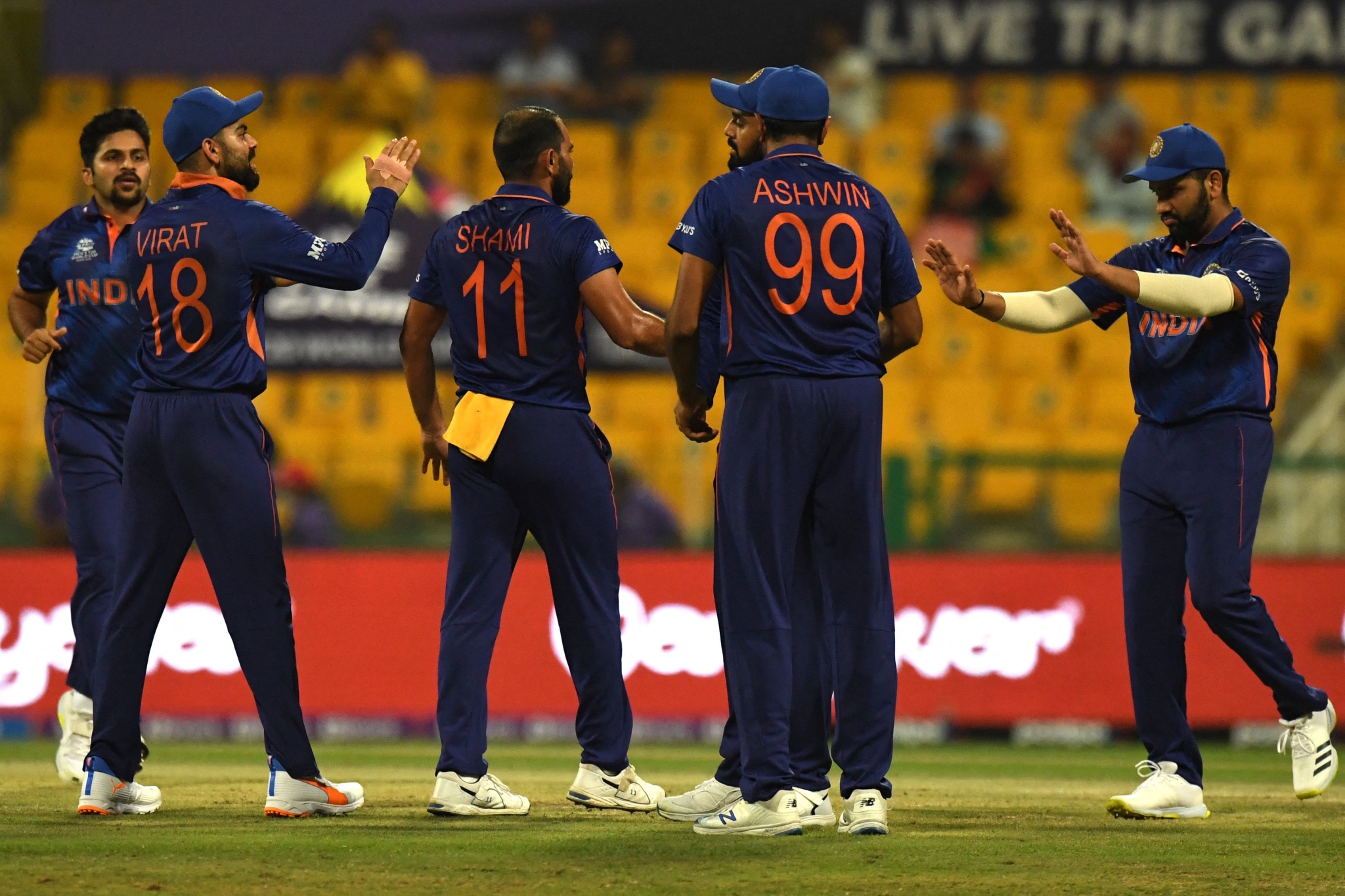 The Indian players celebrate the fall of a wicket in the T20 World Cup. | Photo: AFP

Mohammed Shami's three wickets, Ravichandran Ashwin crucial double strike in the middle overs helped India restrict Afghanistan to 144 for seven and win by 66 runs in their Super 12 T20 World Cup clash in Dubai on Wednesday. This was after KL Rahul and Rohit Sharma struck half centuries and added a 140-run opening partnership to help India to 210.

Hazratullah Zazai (13) and Mohammad Shahzad (four-ball duck) couldn't get off to a flier as Jasprit Bumrah and Shami respectively got the better of them. Bumrah was working up the pace and struck teenager Rahmanullah Gurbaz (19) on the helmet. Gulbadin Naib (18), who was promoted to no.4, struck three fours before being Ashwin's first wicket in T20Is since 2016.

Left-hander Najibullah Zadran's (11) ill-advised reverse sweep against Ashwin proved to be his undoing. At four for 69 in the 12th over, it seemed as if Afghanistan would fold up under 100, which would have meant that India's net run rate soared above Afghanistan as well as New Zealand's.

But skipper Mohammad Nabi found an ally in Karim Janat, who took the attack to India. Shardul Thakur bore the brunt of it as the pair added 57 for the sixth wicket. Nabi then holed out for 35 before Rashid Khan became Shami's third victim.

Batting first after Afghanistan won the toss, the intent from both the openers Sharma and Rahul was up there from the go. Sharma began the assault hitting Nabi over mid off. Rahul then hit Sharafuddin Ashraf, who came in for the retired Asghar Afghan, for a six and a four and Sharma hit him for a four.

In the first five overs, India raced to 52 for none, before a superb last over in the powerplay by Hamid Hassan placed India at 53 for no loss. But the opening pair managed to find boundaries at regular intervals and were on 85 after ten overs.

Overs 12, 13 and 14 went for 16, 12 and 16 and it was clear that both Rahul and Sharma, batting well past their half centuries, had changed gears. They raced past the 100-run mark and at 140, had registered the highest opening partnership for them in T20 World Cups.

Janat finally managed to find the breakthrough, when Sharma on 74 off 47, miscued one to covers. None for 140 then became two for 147 in a space of 11 balls as Rahul was bowled by Naib for 69, when he attempted a scoop.

That is when Rishabh Pant and Hardik Pandya, both of whom struggled to time the shots in the previous games, got together. With Afghanistan increasingly under pressure, the pair freed their arms and hit boundaries for fun. They added an unbeaten 63 in just 21 balls taking India past 200.