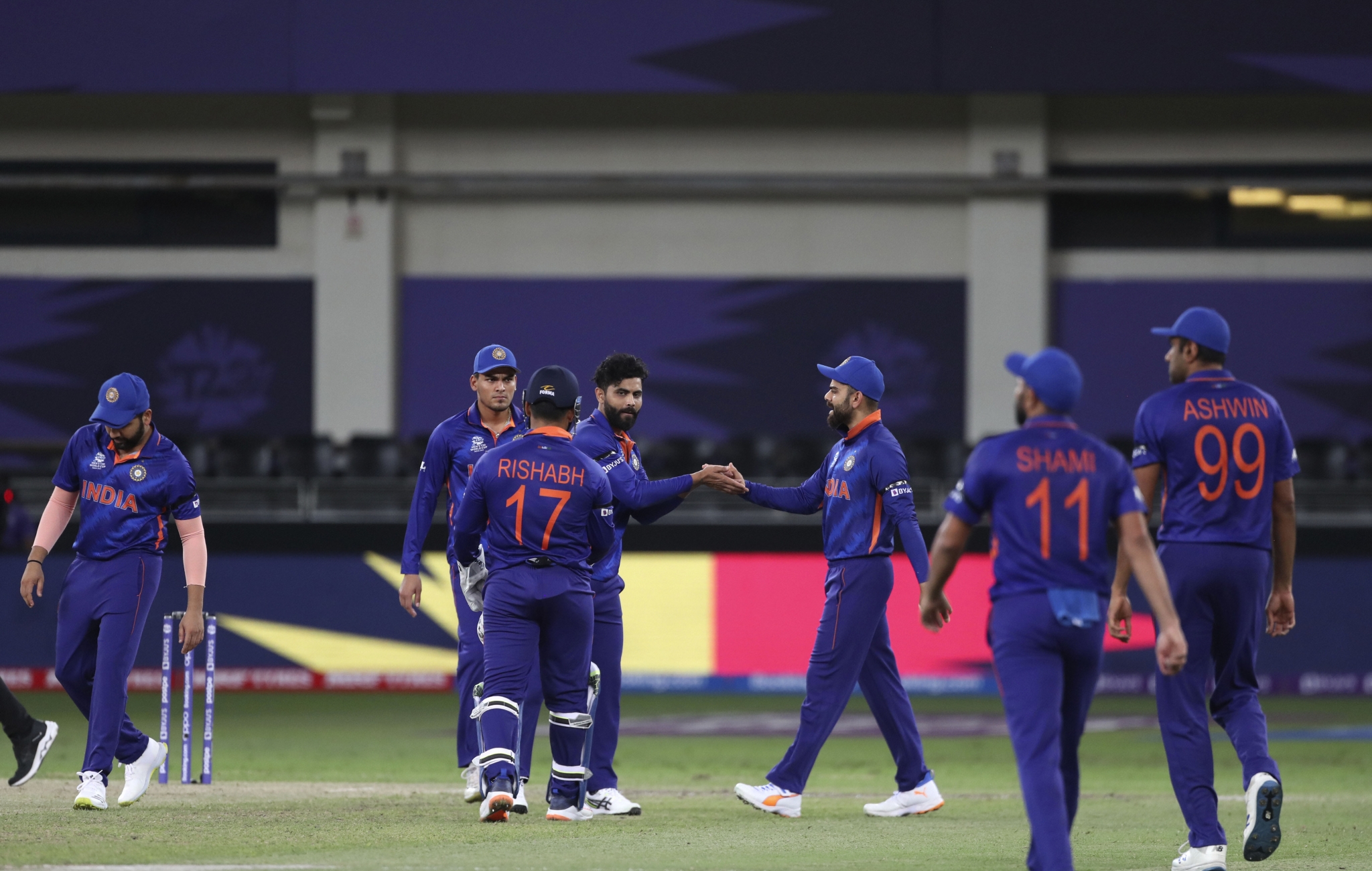 Rohit Sharma and KL Rahul hit half centuries and added 86 for the opening wicket as India beat Namibia by nine wickets to bring curtains to their campaigns in the Men's T20 World Cup in Dubai on Monday. This was after three wickets each from Ravichandran Ashwin and Ravindra Jadeja kept Namibia to 132 for eight.

India blasted 54 runs in the Powerplay, 39 of those coming from Sharma's bat. He had luck on his side, with his one-handed pull put down by Michael van Lingen at fine leg and rolled to the boundary rope for four in the opening over. That drop proved to be costly as Sharma took a four and six off David Wiese followed by another four off Rubel Trumpelmann. Rahul joined the party with a short-arm jab-pull off Wiese over deep mid-wicket in the fourth over.

Post Powerplay, Sharma continued his strong show, taking two boundaries before reaching his second half-century of the tournament in the eighth over. Jan Frylinck broke the opening partnership at 86 as Sharma skied a cross-bat slog to keeper Zane Green. After Sharma's dismissal, Rahul was at his elegant best with wristy flick and clean lofted boundaries.

Suryakumar Yadav, promoted to number three, creamed a flurry of boundaries, with a loft over extra cover and scoop over fine leg standing out as India inched closer to the target. Rahul reached his third half-century of the tournament with a single to long-on before finishing off the chase with a four through long-off.

Once Van Lingen was dismissed by a short ball and extra pace from Jasprit Bumrah (4-0-19-2), the will to fight was not evident on the African nation's batters when Jadeja and Ashwin jointly operated. Mohammed Shami (0/39 in 4 overs) was the only bowler who had an off-day.

Jadeja saw Craig Williams jumping down the track and stopped on his tracks and pitched on length to get enough away turn. Williams missed it and stood mid-pitch looking completely bamboozled.

Baard was out to a typical Jadeja arm ball, which he tried to sweep and was caught plumb in-front.

Once Jadeja got a coupe of wickets, it was Ashwin's turn to get into action as he removed Jan Nicol Loftie-Eaton (5), inducing a cut, a shot that landed into slip fielder Sharma's palms and then bowled one with the angle that cleaned up Zane Green (0). In between he also removed rival skipper Gerhard Erasmus (12).

But the highlight of India's fielding effort was a superb diving catch by Sharma at short cover when he had roughly 0.16 seconds reaction time to pluck the ball inches above the ground to dismiss JJ Smit (9).

Namibia's plight was understandable as they hit only eight fours and two sixes in the entire innings while consuming 58 dot balls.