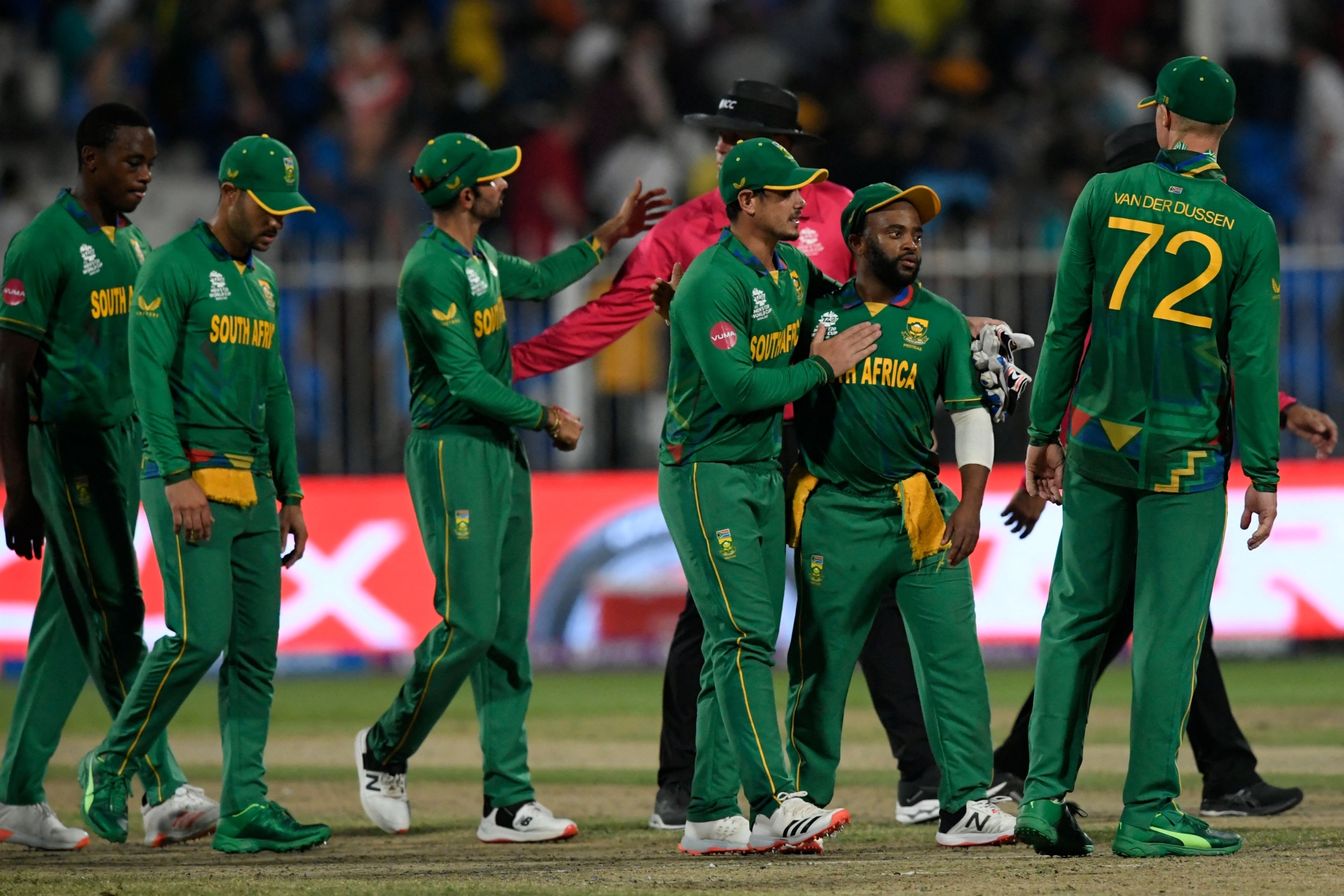 South Africa get together after a match in the T20 World Cup. | Photo: AFP

England suffered their first defeat in the ongoing Men's T20 World Cup but still qualified for the semifinals on the basis of a better net run rate, knocking out victors South Africa from the tournament in Sharjah on Saturday.

South Africa pacer Kagiso Rabada (3/48) produced a sensational final over to become the first man from his country to bag a hat-trick in T20Is and help his side register a 10-run win, denying England an all-win record in the showpiece though it came too late in the day.

The Proteas, who had scored 189 for 2 after being sent in to bat, needed to restrict England to 131 to overtake Australia in net run rate and qualify for the semifinals but it was not to be their day.

England, Australia and South Africa ended on eight points each but the top two teams made it to the semifinals as they had better net run rate than South Africa (NRR +0.739) who were knocked out. England (NRR +2.464) topped Group 1 while Australia (NRR +1.216), who beat West Indies earlier in the day, finished second.

England crossed the 131-run mark in the 16th over which sent South Africa out of the tournament but they needed 14 runs runs from the final over, which they could not achieve.

Rabada dismissed Chris Woakes (7), Eoin Morgan (17) and Chris Jordan (0) in successive balls in the final over for the third hat-trick of the tournament.

It was a bad start for the Protea bowlers as they conceded 10 runs each in the second and third overs.

Rabada was treated with disdain by England openers Jason Roy and Jos Buttler as they took 15 runs off him with the help of three boundaries.

But Roy was taken off the field, retired hurt on 20, as he suffered an apparent leg injury. He could barely complete a single off the first ball of the fifth over and later limped out of the ground. Moeen Ali came in his place.

In-form Jos Buttler was out in the next over of the bowling of Anrich Nortje as he tried to drive to mid-off but mistimed his shot for Temba Bavuma for a low catch.

England were still cruising at 59 for 1 at the end of powerplay but they lost momentum a bit with Jonny Bairstow (1) getting out in the third ball he faced, LBW to Tabraiz Shamsi in the seventh over.

Ali and Dawid Malan got the odd boundaries to take England to 81 for 2 at the halfway mark. The South African bowlers tried hard but found it hard to get wickets or tie down the England batters for long.

Ali hit a huge six off Shamsi in the 13th over but the bowler had the last laugh as the batter went for one big shot too many and was caught by David Miller at long-on.

England went past the 131-run mark to send South Africa out of the T20 World Cup with Liam Livingstone hitting three sixes in a row, the unfortunate bowler being Rabada.

For South Africa, Tabraiz Shamsi took two wickets while Anrich Nortje and Dwaine Pretorius got one each.

Earlier, Rassie van der Dussen smashed an unbeaten 94 and Aiden Markram made 52 not out in a brilliant display of power hitting as they steered South Africa to 189 for 2.

Van der Dussen's 60-ball unbeaten knock had five fours and six sixes while Markram struck two boundaries and four maximums off 25 deliveries during his unconquered innings as the duo shared 103 runs for the unbroken third wicket.

The Proteas added 116 runs from the back-10, thanks to fireworks from van der Dussen and Markram.

South Africa made a slow start and on top of that, they lost their opener Reeza Hendricks (2), cleaned up by Ali in the third over.

The Proteas did not go hammer and tongs in the powerplay, by the end of which they were just 40 for 1. One-down van der Dussen was intent on taking the England bowlers and he was able to hit Chris Woakes for a six and a four in the sixth over.

Quinton de Kock (34) and van der Dussen were able to get the odd boundaries and South Africa reached to 73 for 1 at the halfway mark.

But just as the duo was looking ominous, England broke the partnership of 71 runs for the second wicket with Jason Roy taking an excellent diving catch of de Kock near the boundary of the bowling of Adil Rashid in the 12th over.

Van der Dussen was going great guns and he reached his 50 off 37 balls in the 13th over. He hit Woakes for two consecutive sixes and Markram got another maximum from the bowler as South Africa took 21 runs from the 16th over.