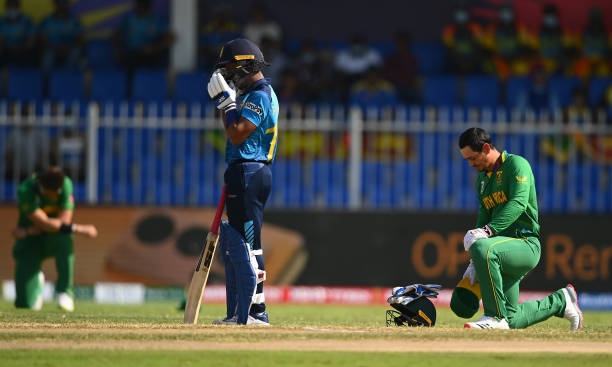 South African opener Quinton de Kock on Saturday took the knee before his team's T20 World Cup match against Sri Lanka here, having pulled out of the side's last game after refusing to perform the gesture.

Alongside the senior player, who returned to the playing XI for the Super 12 game against Sri Lanka, his South African teammates and the on-field umpires were also seen taking the knee, in support of the 'Black Lives Matter' (BLM) movement.

A huge controversy had erupted hours before South Africa's game against West Indies on Tuesday after Cricket South Africa (CSA) issued a sudden directive that all the players must take the knee before every match of the ongoing tournament.

De Kock did not wish to comply and chose to pull out of the clash against the defending champions, which the Proteas won by eight wickets.

On Thursday however, de Kock made himself available for his team's remaining matches of the tournament, saying he is fine taking a knee if it "educates others" and that he was deeply hurt at being called a racist for not making the gesture against West Indies.

De Kock, who is a senior player in the current set-up with 53 Tests, 124 ODIs and 58 T20Is under his belt, insisted that he was not a racist and made it clear that his displeasure was with the timing of CSA's diktat.

"I am deeply sorry for all the hurt, confusion and anger that I have caused. I was quiet on this very important issue until now. But I feel I have to explain myself a little bit," he had said in a statement posted by CSA.

"There always seems to be a drama when we go to World Cups. That isn't fair. I just want to thank my teammates for their support, especially my captain. Temba (Bavuma).

"People might not recognise, but he is a flipping amazing leader. If he and the team, and South Africa, will have me, I would love nothing more than to play cricket for my country again."