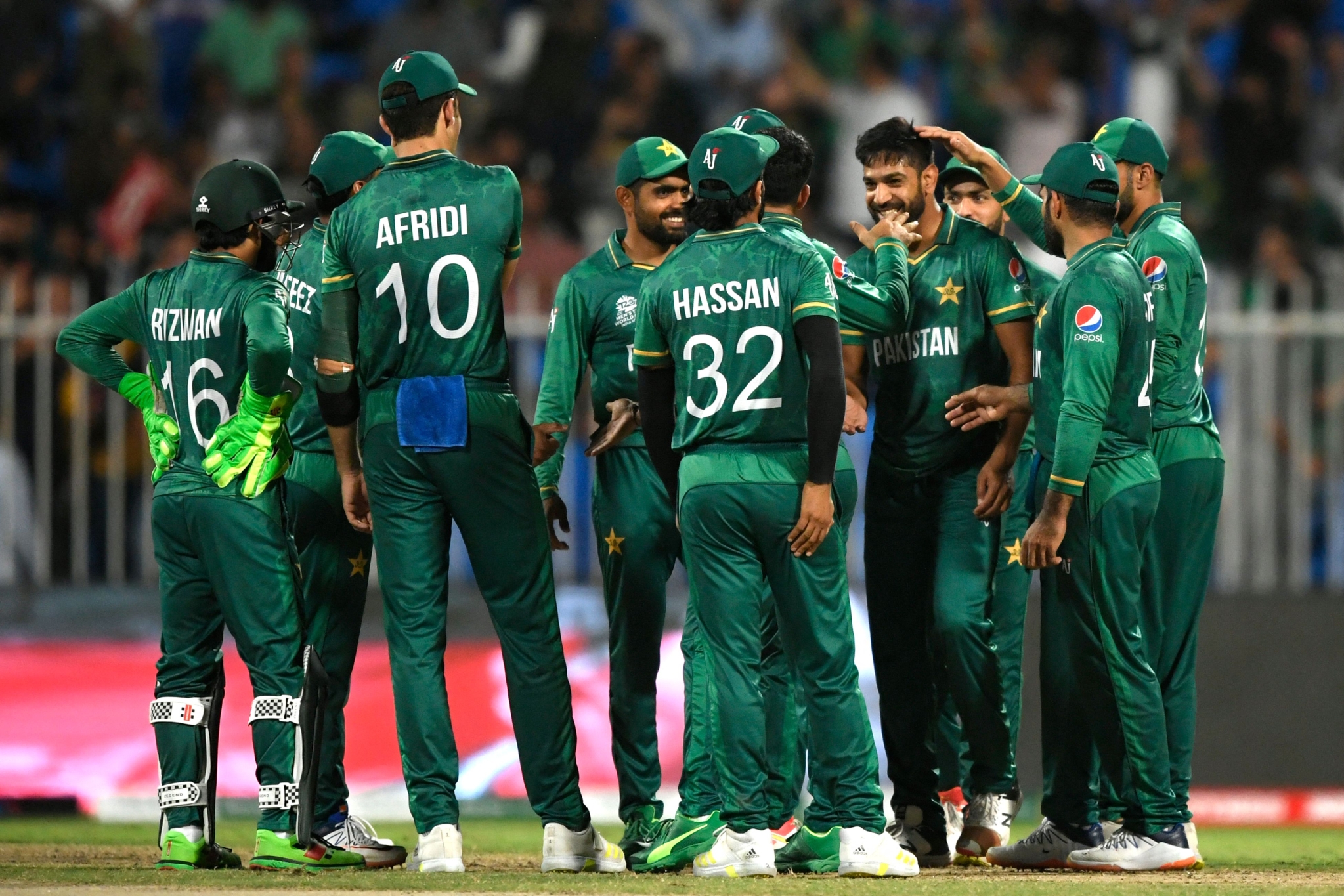 Pakistan celebrate the fall of a wicket in the T20 World Cup. | Photo: AFP

Shadab Khan's double strikes along with the other bowlers helped Pakistan keep Scotland to 117 for six to win by 72 runs in their Super 12 clash of the T20 World Cup in Sharjah on Sunday. Richie Berrington stayed unbeaten on 54 for Scotland. Earlier, Babar Azam hit a steady 66 while Shoaib Malik hit an unbeaten 18-ball half century to help Pakistan to 189 for four.

George Munsey began by taking two boundaries off Shaheen Shah Afridi's first two overs. Kyle Coetzer hit a boundary off Imad Wasim but was bowled by Hasan Ali in a wicket-maiden final over of Powerplay. Post that runs began to dry as Pakistan began to exert pressure on Scotland.

Scotland were dealt with a strong blow as Matthew Cross was run-out at the non-striker's end with Wasim getting a hand on the ball on a straight drive from Munsey. In an attempt to break free, Munsey tried to attack Khan but sliced to short third man in the 11th over. Two balls later, Khan had another wicket as Dylan Budge was bowled by a googly.

Though the result was a foregone conclusion, Scotland tried to delay the inevitable. Michael Leask had a 41-run stand with Berrington for the fifth wicket. The partnership broke when Afridi clean bowled Leask in the 16th over.

Berrington, the lone warrior for Scotland, smashed two more boundaries and reached his half-century with a brace off Ali. But it wasn't enough as Pakistan ended their Group 2 campaign with an all-win record.

Thanks to Malik's blitz earlier, Pakistan scored 43 runs in the last two overs, including 26 in the final six balls bowled by Chris Greaves. It was tournament's joint fastest fifty alongside KL Rahul's 18-ball 50 which also came against Scotland.

Azam, who once again donned the role of the accumulator, became only the third batter to score four half-centuries in a T20 World Cup after former Australia opener Matthew Hayden and India captain Virat Kohli, who achieved the feat in 2007 and 2014 respectively.

Having struggled to 60 for two at the halfway stage, Pakistan got 129 runs in back 10.

Opting to bat first, Azam and Mohammad Rizwan were off to a sedate start, as the Scotland bowlers managed to keep the run rate below six until the powerplay.

Having smoked Bradley Wheal for a gigantic six over deep mid-wicket, Rizwan was dismissed by Hamza Tahir, who drew the batter with a tossed-up delivery before getting an under-edge to the wicketkeeper.

The Scots deserves plaudits for the manner in which they kept a lid on the Pakistan scoring as they ended the powerplay at 35 for no loss, which became 35 for one in the first ball of the next over with Rizwan's dismissal.

Even as Azam went along nicely, one-down Fakhar Zaman's lean run in the tournament continued as the batter ended up giving a catch to Leask while going for a big shot off Greaves.

Pakistan were not so well placed at 60 for two at the halfway stage as Scotland managed to keep their opponents to a run a ball.

However, things changed completely as Pakistan entered the back 10 with both Azam and the veteran Mohammad Hafeez (31 off 19 balls) cutting loose to clear the ropes at regular intervals during a brisk 53-run third-wicket partnership.

Azam was his usual classy self when he played the ball along the ground, but at the same time, he did not hesitate to go over the top, the result of which were three sixes.

After Azam's dismissal, the show belonged to Malik.