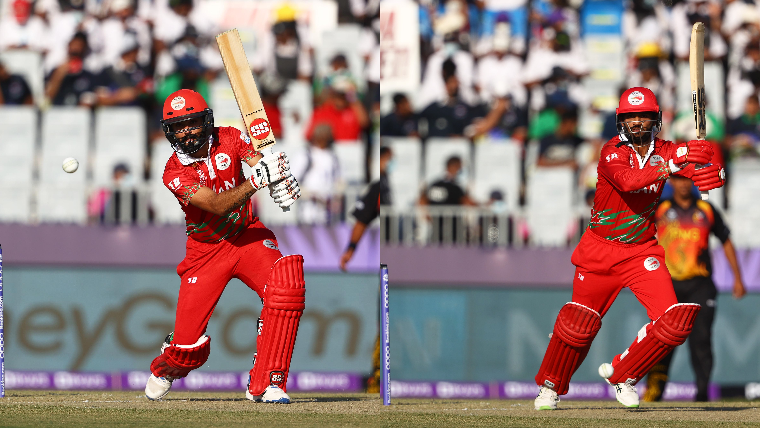 Ilyas and Singh began strongly, scoring 46 inside the powerplay. The duo pressed on the accelerator towards the halfway mark in the chase, as they took eleven runs each of overs eight, nine and ten. Singh was at his destructive best, scoring his fourth T20I fifty. He finished eventually with 73 off just 42 balls.

Ilyas was the more sedate partner, who brought up his in the penultimate ball of the game with a single. He finished unbeaten on 50 off 43 balls and watched from the other end as Singh belted a half-tracker from Charles Amini over the deep mid-wicket fence to finish the game.

The pair’s 131-run unbeaten stand is Oman’s second best in T20Is while it was just their second ten-wicket win in the format.

Earlier, having put in to bat, PNG scraped to 129/9 in their 20 overs, with Oman skipper Zeeshan Maqsood picking his third T20I four-wicket haul in the process.

PNG captain Assad Vala and Amini found themselves in the middle with the score on zero for two. They batted steadily and added 81 together for the third wicket. Amini was the aggressor, scoring 37 off just 26 balls, before a mix-up with the captain Vala saw the partnership being broken.

Vala, meanwhile, batted steadily and made his fourth T20I half century, as PNG were placed on 102/4 with six overs to go. Kaleemullah dismissed Vala (56), after which Maqsood ran through the middle order as PNG lost their way to end up with a below part total.