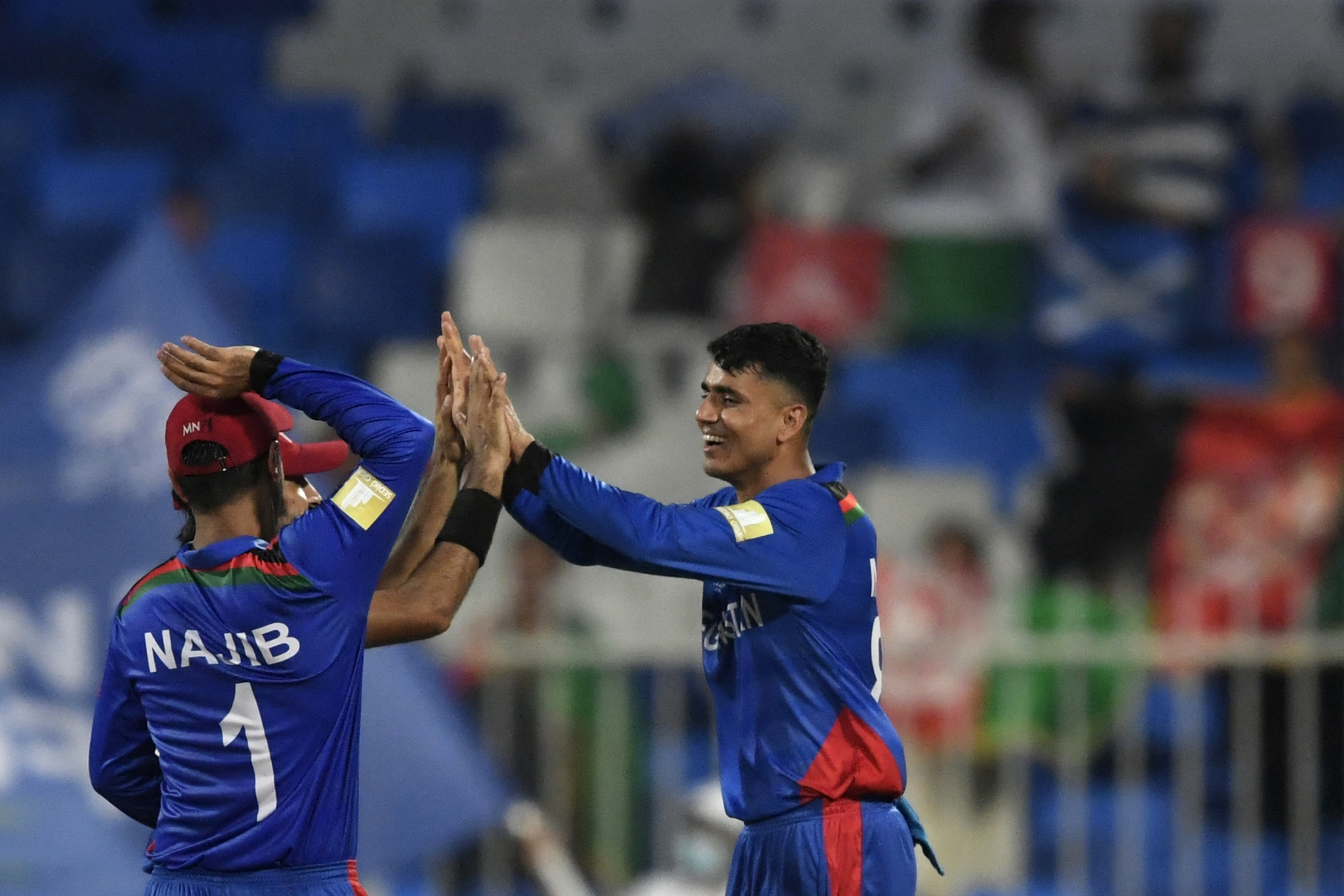 Scotland were caught off guard against Afghanistan's spin twins, Mujeeb Ur Rahman and Rashid Khan, who picked nine wickets between them, to be bowled out for a mere 60 in their Super 12 T20 World Cup match in Sharjah on Monday. Scotland lost the game by a huge 130 runs, after Afghanistan posted 190 for four with Najibullah Zadran scoring a half century.

Scotland piled up 27 runs in the first three overs before Mujeeb scalped Scotland skipper Kyle Coetzer and Calum MacLeod off successive balls. Mujeeb didn't get his hat-trick but two balls later he trapped Richie Berrington to reduce Scotland to 28 for three after four overs.

Wickets continued to tumble for Scotland as Matthew Cross and George Munsey (25) departed in the next two overs.

The trend continued as Michael Leask, Chris Greaves and Mark Watt too failed to counter the guile of Rashid Khan (4/9) and Mujeeb.

After Mujeeb, it was Rashid's turn to cause destruction as he polished off Scotland the tail to hand Afghanistan a big win.

Zazai and Mohammad Shahzad (22) got Afghanistan off to a flier, stitching 54 runs off just 35 balls before the latter holed out at deep mid-wicket boundary.

Zazai played aggressively from the onset, hitting the bad balls to the fence and over it with consummate ease but his 30-ball knock was cut short by Mark Watt as he inside edged a delivery on to his stumps in the 10th over with Afghanistan reaching 82 for two.

Thereafter, Gurbaz and Zadran maintained the scoring rate as Afghanistan kept up the pressure on Scotland bowlers.

While Gurbaz played steadily from one end, Zadran was attacking from the onset as Afghanistan reached 127 for two after 15 overs.

In between, Gurbaz also showed his attacking prowess as he clobbered Josh Davey over the mid-wicket boundary with a helicopter shot to hit a maximum.

Gurbaz, from there on, took his game to the next level and clobbered Brad Wheal for two sixes over long on to accumulate 16 runs from the 17th over.

Zadran was not to be left behind as he hit Watt straight down the ground for a boundary and then followed it up with a six over long-off in the next over. But Gurbaz fell four runs short of his fifty when he handed an easy catch to Kyle Coetzer off Davey.

With wickets in hand, Afghanistan gathered 63 runs in the last five overs.