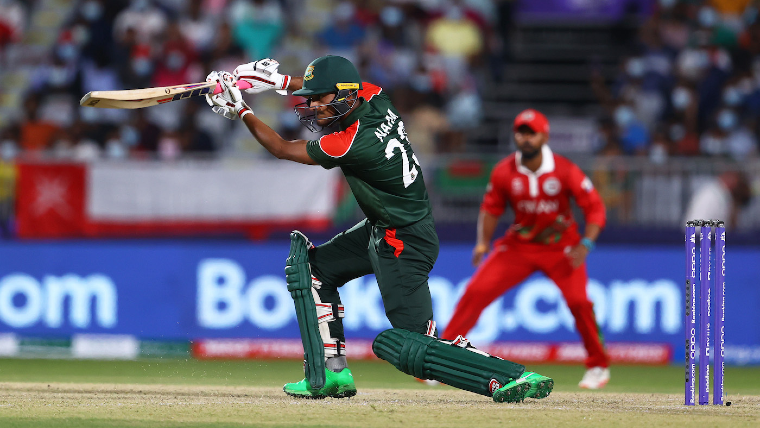 Mohammad Naim’s third half century and a crucial 42 from Shakib Al Hasan helped Bangladesh post 153 all out against Oman in their Group B clash against Oman at Al Amerat on Tuesday.

Opting to bat first, Bangladesh lost Liton Das (6) early in the piece, trapped LBW by left-arm seamer, Bilal Khan. Das was ruled out caught behind earlier but used the DRS to save himself. Mahedi Hasan, promoted to no.3 to make use of the fielding restriction, failed to disturb the scorers, courtesy a stunning caught and bowled. Fayyaz Butt, who was brought in for Khawar Ali, was in the thick of it.

Al Hasan then joined Naim and it seemed as if the track was slow for the batters to play freely. Khan, Butt and Kaleemullah bowled disciplined lines and lengths, making life tough for the Bangladesh duo. But Al Hasan began the acceleration, first by playing the scoop and then using his feet to take on mid-off. Mohammad Nadeem bore the brunt as 17 runs were taken off his third over. Nadeem was unlucky earlier as Al Hasan was dropped off his bowling.

With the Bangladesh all-rounder looking set to take the innings away from Oman, Aqib Ilyas’ direct hit found him short at the non-striker’s end and Al Hasan walked back for 42 off just 29. Naim then hit a four to bring up his fifty and then smacked Khan for a six.

However, Kaleemullah dismissed him for 64 off 50 in his last over, which also so Afif Hossain fall. Mushfiqur Rahim, who walked in at an unusual no.8 spot, hit a four in his four-ball stay for six. Butt got him and Mohammad Saifuddin (zero) off successive balls.

Mahmudullah flexed his muscles for a six and a four and finished on 17 off 10.