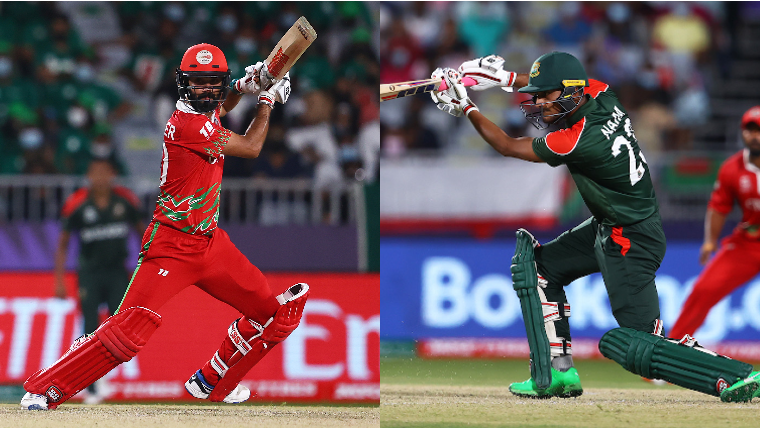 Jatinder Singh has made quite a name for himself. As an opener he strikes in excess of 127 and averages close to 40. Stunning numbers for someone who plays for an Associate side.

On Tuesday, he kept the hopes of the supporters of Oman high till the time he was in the middle. However, a run-chase of 154 against an experienced side like Bangladesh was always going to be a tall one. Eventually, the Tigers stifled Oman to notch up two crucial clash in Group B of the T20 World Cup at the Al Amerat.

Singh yet again impressed with his stroke-play from the start, despite Oman losing Aqib Ilyas (6) in the second over. In company of Kashyap Prajapati, Singh, who hit 73 not out in their opening clash, took the attack to Bangladesh. He took a liking to Shakib Al Hasan, hitting him for a four in the all-rounder’s first over before following it with a four and a six in his next.

In the interim, he lost Prajapati (21) but kept going in the company of captain Zeeshan Maqsood. With nine overs to go, Oman needed 74 and had eight wickets in the bank. But soon, Mahedi Hasan dismissed Maqsood (12) while an over later, Singh (40) picked out deep backward square leg off an Al Hasan half-tracker to effectively end the chase for Oman. The Bangladesh all-rounder then finished with three wickets in the game. Mustafizur Rahman returned four wickets.

Earlier, batting first in a must-win game, Bangladesh lost Liton Das (6) early in the piece, trapped LBW by left-arm seamer, Bilal Khan. Das was ruled out caught behind earlier but used the DRS to save himself. Hasan, promoted to no.3 to make use of the fielding restriction, failed to disturb the scorers, courtesy a stunning caught and bowled. Fayyaz Butt, who was brought in for Khawar Ali, was in the thick of it.

Al Hasan then joined Naim and it seemed as if the track was slow for the batters to play freely. Khan, Butt and Kaleemullah bowled disciplined lines and lengths, making life tough for the Bangladesh duo. But Al Hasan began the acceleration, first by playing the scoop and then using his feet to take on mid-off. Mohammad Nadeem bore the brunt as 17 runs were taken off his third over. Nadeem was unlucky earlier as Al Hasan was dropped off his bowling.

With the Bangladesh all-rounder looking set to take the innings away from Oman, Ilyas’ direct hit found him short at the non-striker’s end and Al Hasan walked back for 42 off just 29. Naim then hit a four to bring up his fifty and then smacked Khan for a six.

However, Kaleemullah dismissed him for 64 off 50 in his last over, which also so Afif Hossain fall. Mushfiqur Rahim, who walked in at an unusual no.8 spot, hit a four in his four-ball stay for six. Butt got him and Mohammad Saifuddin (zero) off successive balls.

Mahmudullah flexed his muscles for a six and a four and finished on 17 off 10.