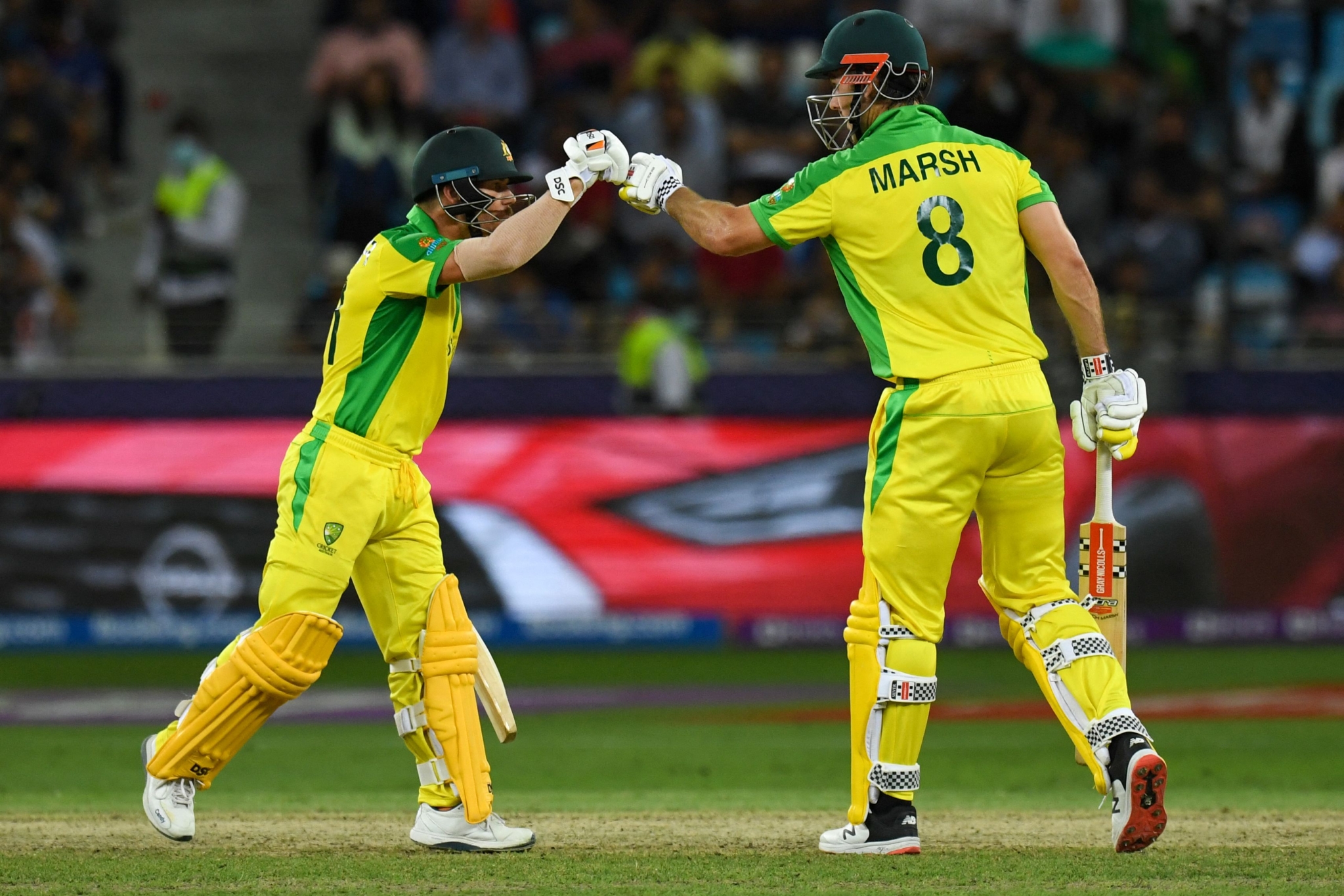 Mitchell Marsh hit an unbeaten 77, while David Warner scored 53 off just 38 balls as Australia cruised home to an eight-wicket win over New Zealand to win their maiden Men's T20 World Cup in Dubai on Sunday. The Australian pair was involved in a 92-run partnership for the second wicket, which helped the men in yellow put on a dominant run-chase.

This was after a Kane Williamson masterclass helped New Zealand recover from a slow start and post 172 for four, after being asked to bat first. The skipper smashed 85 off just 48 balls after being on 18 off 19 balls at one point.

Warner continued his rich run of form and despite Aaron Finch's (five) loss early, kept the scoreboard moving steadily. In Marsh, he found an ally who looked at home right from the moment he walked in to bat. The all-rounder hit the first ball he faced in the innings for half a dozen over long leg and never looked back.

Picking the lengths early, Warner and Marsh feasted on whatever the Kiwi pacers threw at them. Williamson brought Sodhi after the Powerplay, and after a watchful over, Warner tore into him. Mitchell Santner's introduction from the other end had little effect as the four overs after the field restrictions went at almost ten an over.

After drinks, Warner crossed his half century before being undone by a full, slower ball of Trent Boult to be knocked over. Marsh, at the other end, though showed no signs of backing down. Sodhi's third over, his final for the night, was taken for 16 as Marsh brought up his fifty off just 31 balls, the fastest in the final of a Men's T20 World Cup. This was just an hour after Williamson scored the then quickest one off 32 balls.

Marsh and Glenn Maxwell (28 not out off 18) helped close the chase down with an unconquered 66-run partnership.

Earlier, openers Martin Guptill and Daryl Mitchell got off to positive starts, with the latter welcoming Maxwell to the bowling crease with a maximum. Josh Hazlewood, though, got rid of him for 11 off eight, on what seemed like an up-and-down surface at the start.

Guptill struggled to get big shots away even as Williamson got his eye in. The Kiwi skipper was on 18 off 19 balls before he teed off. Williamson struck three successive fours off Mitchell Starc's second over, which changed the momentum and included a dropped catch of the skipper.

Meanwhile, Guptill's struggles came to an end when he holed out off Adam Zampa. Glenn Phillips then struck a six and a four in his 11-ball 18 before becoming Hazlewood's second scalp.

Williamson, who tore into Zampa's last over scoring the fastest fifty in a Men's T20 World Cup final, fell in the same over as Hazlewood finished with three for 16.

James Neesham and Tim Seifert hit a six and a four in their knocks to help New Zealand to a score over 170.