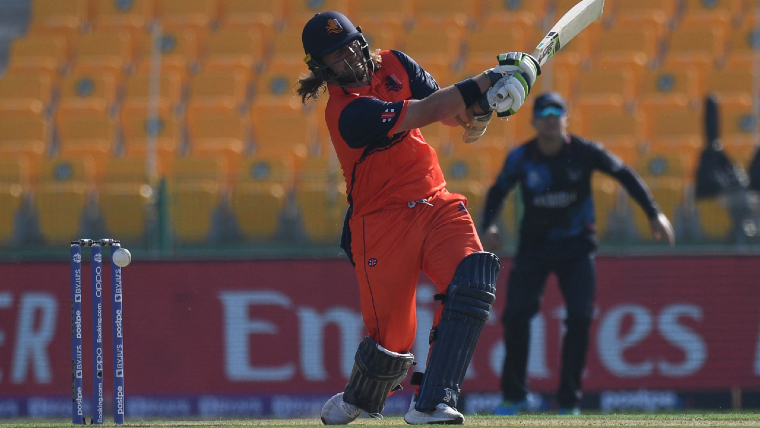 An attacking 70-run knock from opener Maxwell O'Dowd has helped Netherlands post 164/4 in their 20 overs against Namibia in their Group A match in the T20 World Cup in Abu Dhabi.

O'Dowd, who had hit 51 against Ireland in the previous match, expressed himself freely, going after the bowlers. At times he played uppish shots, not exactly in control but still kept finding the gaps to keep the scoreboard going. His 56-ball knock had six fours and a six.

Stroke-making was not easy on the wicket and his opening partner Stephan Myburgh (17) was happy playing the ball according to merit. Myburgh got out when he tried to slap one hard from Frylinck but ended up giving a simple catch to Baard at point.

The Dutch side had high hopes from experienced Roelof van der Merwe (6) but he also fell cheaply off pacer David Wiese.

Next-man in Ackermann though timed the ball nicely and even used his feet effectively. He added 82 for the third wicket with O'Dowd and scored 35 before being dismissed.

O'Dowd completed his fifty with an inside-out boundary off the bowling of spinner Bernard Scholtz in the cover region. That shot also brought up hundred of the side in the 14th over.

Pacer JJ Smit was impressive with his accurate widish deliveries in slog overs, not letting the Dutch batters score freely. Wiese too kept it tight.