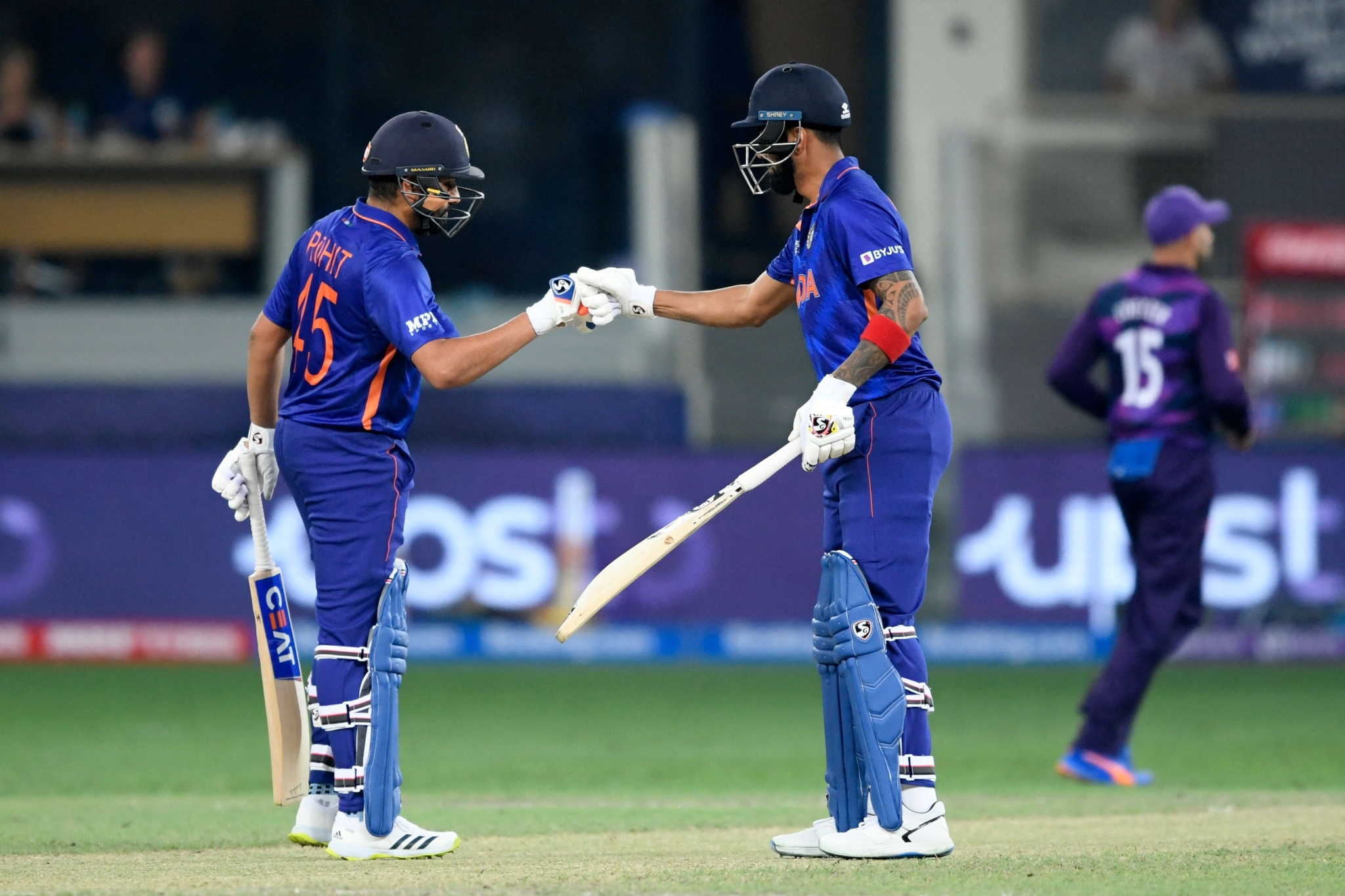 KL Rahul and Rohit Sharma's quick 70-run opening partnership in just five overs helped India overhaul the 86-run target set by Scotland with eight wickets and 81 balls to spare in their Super 12 clash of the T20 World Cup in Dubai on Friday. This was after three wickets each by Ravindra Jadeja and Mohammed Shami had helped India dismiss Scotland for a paltry 85.

India needed to chase the target in 43 balls in order to surpass both New Zealand and Afghanistan on net run rate. The hosts got home on the 39th ball, thanks to the openers.

Rahul and Sharma were watchful for a couple of balls before teeing off. The former was the aggressor, taking Brad Wheal to the cleaners. Alasdair Evans was the next in Rahul's firing line as he flew to 25 off just nine balls before smashing a fifty off just 18 balls, the second fastest in T20 World Cups for India, third quickest overall.

Sharma, on the other hand, also hit five fours and a six en route his 15-ball 30, before a Wheal toe-crusher trapped him. Rahul holed out for 50 off 19 with the win in sight, before Suryakumar Yadav finished the chase with a six. It was the biggest win in T20 World Cups in terms of balls to spare for India and third biggest overall.

Earlier, George Munsey began well for Scotland, flicking a straight and full ball from Jasprit Bumrah over deep backward square leg for half a dozen, after Virat Kohli won the toss and opted to bowl. But Bumrah also drew first blood soon when he disturbed Scotland captain Kyle Coetzer's (one) woodwork.

Munsey showed how strong he is against spin by welcoming Ravichandran Ashwin to the bowling crease with three fours in an over - one beautifully creamed through covers while the other two via reverse sweeps. But Shami dismissed him for 24 off 19, when the southpaw hit one straight to mid-on.

As soon as the powerplay ended, Jadeja was brought in and he struck by dismissing Richie Berrington (zero) and Matthew Cross (two) in the same over. From four for 29, Michael Leask and Calum MacLeod kept the bowlers at bay for 29 more runs before an accurate Jadeja trapped the former plumb for 21 off 12.

From there, there was nothing more to write about for Scotland, with India picking three wickets in three balls, courtesy Shami's double strike that sandwiched a run out. Bumrah picked the final wicket to go past Yuzvendra Chahal as the leading wicket-taker in T20Is for India.