Kyle Coetzer, Scotland captain, struck 41 off just 28 balls after Josh Davey picked 3/25 to help the men in purple down Oman and qualify for the Super 12
FPJ Web Desk 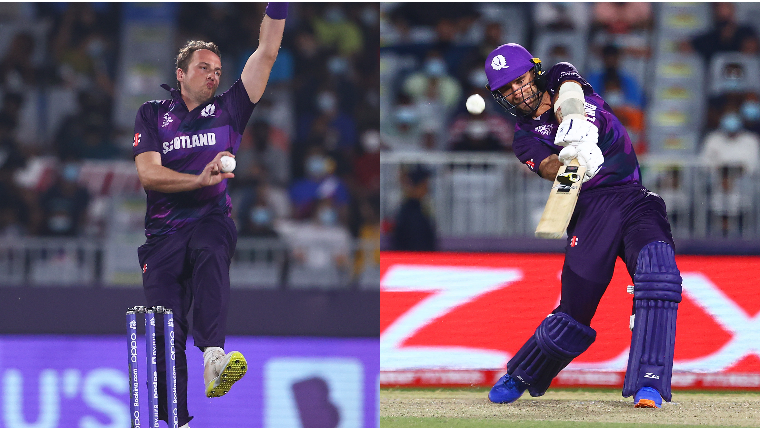 Scotland romped to the Super 12 stage of the T20 World Cup after an eight-wicket win over Oman at Al Amerat in their Group B clash on Thursday. Captain Kyle Coetzer led from the front, smacking an attacking 41 off just 28 balls.

Scotland, who had stunned Bangladesh by six runs before beating Papua New Guinea by 17 runs in their previous matches, remained unbeaten and finished their group encounter with six points.

Besides Scotland, Bangladesh also qualified for the Super 12s from the group by finishing second with four points. Hosts Oman and PNG are out of the tournament.

Scotland are now placed alongside India, Pakistan, New Zealand, Afghanistan and an yet-to-be decided second-placed team from Group A in Group 2 of the Super 12s.

Chasing 123, Scotland had a great power-play with 45 runs for the loss of George Munsey (20). Coetzer took over from Munsey, carting Zeeshan Maqsood for a six followed by taking a six and four off Fayyaz Butt in the next over.

Coetzer slammed a 93-m six off Mohammad Nadeem in the ninth over before Khawar Ali beat him on the inside edge with a googly and hit the stumps off pads on the stroke of drinks break.

Richie Berrington soothed Scotland's nerves with massive sixes on both sides of the wicket off Khawar Ali in the 14th over. Berrington then smacked Nadeem for a four over mid-wicket before sealing Scotland's spot in the Super 12 with a thumping six over deep square leg.