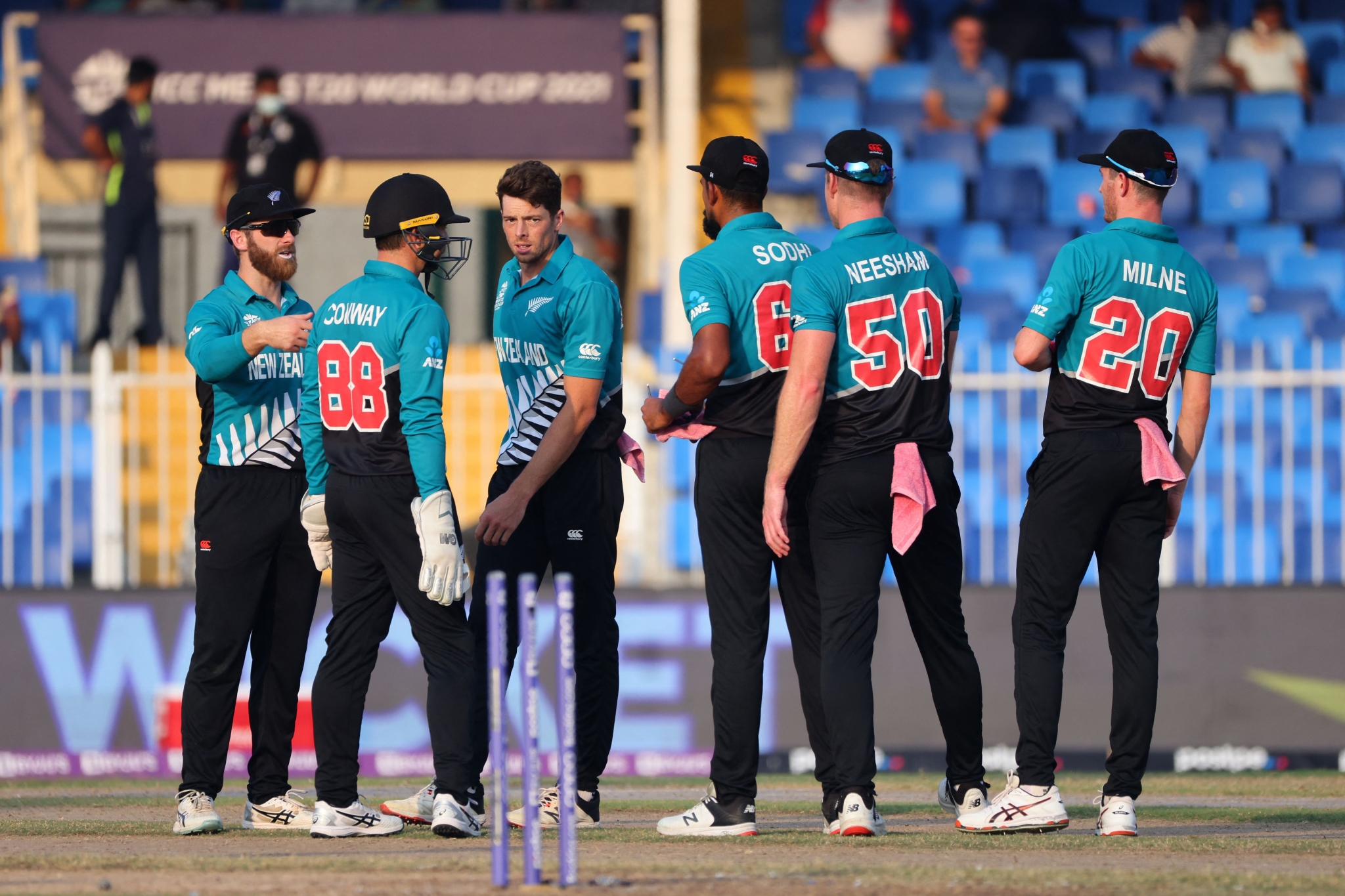 Tim Southee and Trent Boult picked two wickets each as New Zealand defeated Namibia by 52 runs in their Super 12 match of the T20 World Cup in Sharjah on Friday. This was after Glenn Phillips and James Neesham added an unbeaten 76 to help New Zealand get to 163 for four. As a result of the win, Kane Williamson became the most successful captain for Black Caps in the T20 World Cup.

The win also meant that Kiwis jumped to the second spot in the standings and now have six points with a net run rate of +1.277. They play Afghanistan on Sunday in what could be a virtual quarterfinal.

But New Zealand sent back both the openers, first Neesham cleaned up Lingen in the eight over and then 29-year-old slow left-arm orthodox bowler Santner castled Baard with Namibia slipping to 51/2.

Zane Green (23) and David Wiese (16) only delayed the inevitable and experienced pacer Southee trapped the latter in front in the 15th over to dash the remaining opposition hopes.

Earlier, Phillips and Neesham took the Namibian attack to the cleaners and propelled New Zealand past 150 which looked unlikely at one stage.

New Zealand were struggling at 87/4, but brutal hitting by Phillips and Neesham ensured that the Kiwis were back in the game.

The duo added 76 runs for the unbroken fifth wicket in just 36 balls. While Phillips hammered one four and three sixes, Neesham struck one boundary and two maximums.

Asked to bat, New Zealand opener Martin Guptill (18) fell in the fifth over, after offering a simple catch to Ruben Trumpelmann off David Wiese (1/40).

Guptill launched into left-arm spinner Bernard Scholtz (1/15), hitting him for a maximum over long-on.

In the fourth over, Daryl Mitchell (19) got his first boundary, straight down the ground off Johannes Smit, as the Kiwis raced to 30/0 after four overs.

But Namibia pegged the Kiwis back by sending both the openers to the dressing room. First Wiese broke the 30-run opening stand by dismissing Guptill and then Scholtz dismissed Mitchell, who was caught in the deep by Michael van Lingen in the seventh over, as the Kiwis slipped to 43/2.

Skipper Kane Williamson (28) and Devon Conway (17) then tried to rally the innings with their 38-run stand.

Williamson opened his arms in the 11th over, hammering a maximum and a four on successive balls off leg-spinner Jan Nicol Loftie-Eaton.

But Williamson was cleaned up by rival captain and leg-spinner Gerhard Erasmus (1/22) in the 13th over with New Zealand reaching 81/3. It soon became 87/4 as Conway was also run-out.

After a slow start, it was the Phillips and Neesham show as they upped the ante from the 18th over, when they launched into Wiese, collecting 21 runs off it.