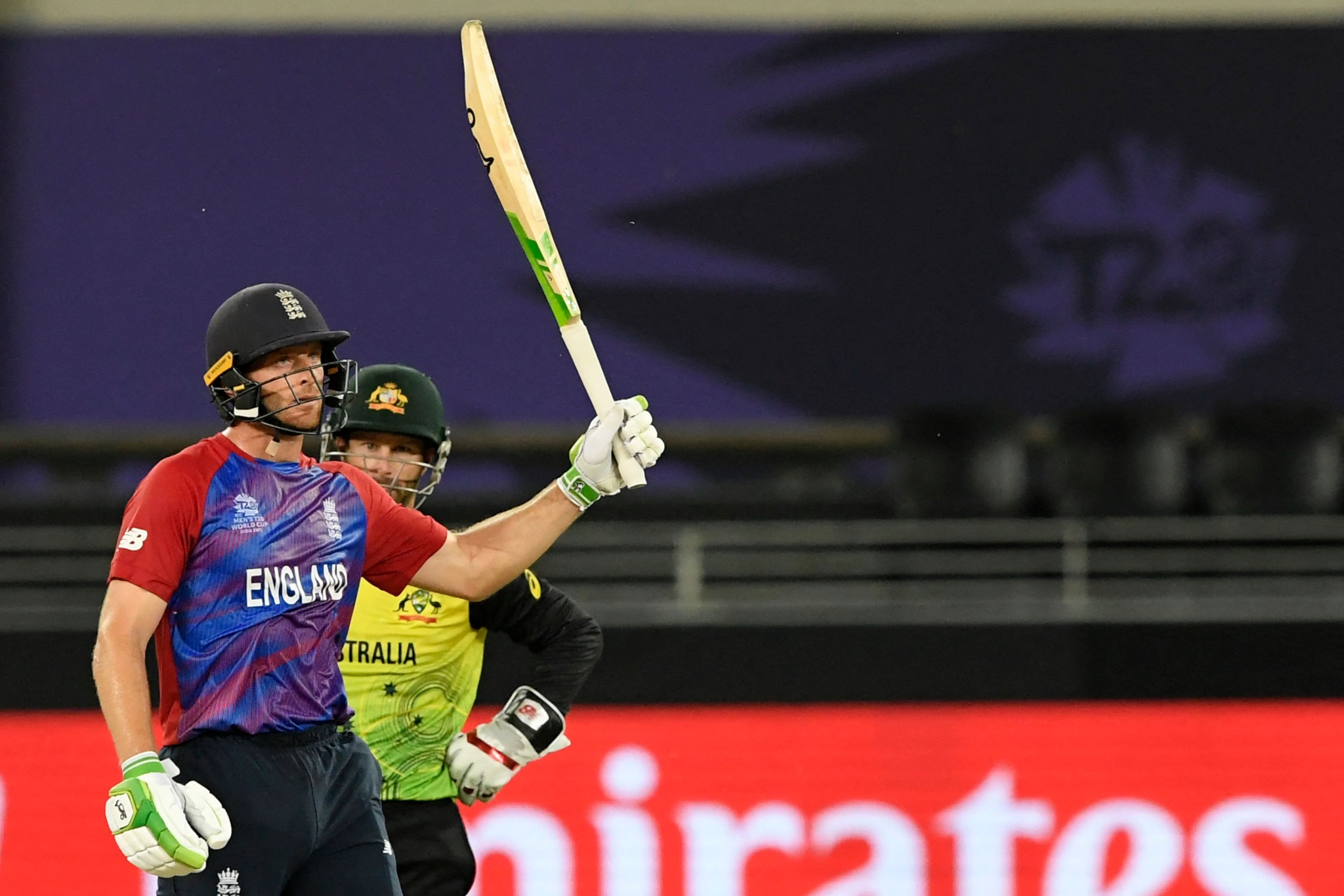 England's Jos Buttler raises the bat after a half century in the T20 World Cup. | Photo: AFP

Jos Buttler smashed an unbeaten 71 off just 32 balls as England made light work of the 126-run chase against Australia in their Super 12 clash of the Men's T20 World Cup in Dubai on Saturday. Earlier, a combined bowling effort from England, led by Chris Jordan's three wickets, saw them bowl the Aussies out for 125.

Buttler and Jason Roy (22) hammered the Australian bowlers all around the park to amass 66 runs for no loss in the powerplay, the highest by any team so far in the tournament.

Buttler was the most dangerous of the England batters as he slammed five fours and as many sixes during his unbeaten knock, which is the fastest fifty in the tournament till now.

Australia managed to get rid of Roy and Dawid Malan (8) but it made no difference as Jonny Bairstow joined Buttler in sending their opponents on a leather hunt.

Bairstow smashed two sixes off Adam Zampa during his unbeaten 10-ball 16 run innings as England reached 126 for two to win the match with 50 balls to spare.

England thus completed a hat-trick of wins, while Australia suffered their first loss of the tournament after beating South Africa and Sri Lanka in their previous two games.

Ashton Agar (20), Pat Cummins (12) and Mitchell Starc (13) then hit some lusty blows at the death to give some respectability to the Australian total.

Woakes was in action early on as he induced a nick from Warner to deal the first blow and then pulled off a sensational catch at mid-on to remove Steve Smith off Jordan's bowling.

Woakes then trapped Maxwell in front of wicket as Australia slumped to 15 for 3 in 4 overs.

Leg-spinner Adil Rashid (1/19), who had opened the bowling for England, then returned to trap Marcus Stoinis LBW with a googly as Australia were tottering at 21 for 4 in 6.1 overs.

Matthew Wade (18) then joined skipper Finch, taking Australia to 41 for four in 10 overs.

Wade, however, perished in the 12th over after holing out at long-on to Jason Roy off Liam Livingstone.

Finch smashed back-to-back boundaries to cream 10 runs off Tymal Mills, before picking up another boundary off Jordan in the next over.

Agar then exploded in the 17th over as he pulled one from Woakes over deep backward square leg before walloping him for another six over deep midwicket to score 20 runs of the over.

He was back to the pavilion after being caught by Livingstone (1/15).

Cummins then clobbered the first two balls he faced for maximums to give Australia momentum.

But Jordan returned to remove Finch and Cummins in successive balls.