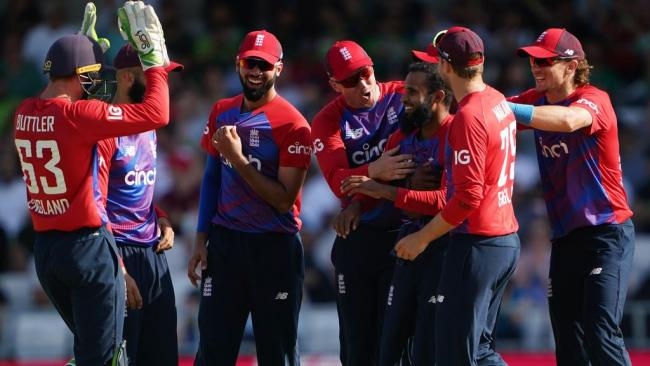 Cheers in the England camp at the fall of a wicket | Photo: Twitter

England would hope to set straight an unwanted record when they meet West Indies in a Super 12 match of the ICC Men's T20 World Cup the Dubai International Cricket Stadium here on Saturday.

England have never beaten West Indies in five encounters in ICC Men's T20 World Cup and will be trying their best to win the sixth clash between the two teams, which will also help them set off on a winning note in the current edition.

But West Indies, the most successful nation in T20 World Cups having won the title twice -- in 2012 and 2016, are the most unpredictable teams in the fray. The team from the Caribbean islands comprises players that can blast any attack to smithereens on a particular day but can also collapse in a heap the next. They have assembled in UAE a strong squad of players that are capable of destroying any lineup on their day.

In 2017, West Indies played 17 T20I matches, winning eight and losing six, three matches against Pakistan were washed off. They won the series against Sri Lanka and Australia but lost to South Africa. West Indies have lost both their warm-up matches, to Pakistan and Afghanistan.

With England without key players like Ben Stokes, Jofra Archer, and Sam Curran, Saturday's clash could go any way -- whichever team holding its nerves will win the match.

Both England and West Indies have players that have played in the IPL that ended in UAE recently and both sets of players struggled to get big scores. Chris Gayle withdrew from the IPL before the last couple of rounds citing bubble fatigue. West Indies skipper Kieron Pollard too did not have many noteworthy performances as Mumbai Indians failed to make it to the playoffs.

ALSO READ: Cancelled ENGvIND Test to be played in July 2022

England skipper Eoin Morgan too has been struggling for runs though he did well on the captaincy front by leading Kolkata Knight Riders to the final against the Chennai Super Kings. Jason Roy had one good innings in the last stages of the IPL while Liam Livingstone failed to fire. Moeen Ali came up with a few cameos as CSK won the title.

In the last five T20I matches, England beat Pakistan in two matches and lost one while two matches were abandoned without a ball being bowled. West Indies too had similar results, three of their matches against Pakistan were washed off by rain while they lost one match to Babar Azam's team and beat Australia in another match.

With their players having mixed luck recently, both England and West Indies will be hoping to start their campaign in the 2021 edition of the Men's T20 World Cup on a winning note. That will be an apt morale-booster for the tougher battles ahead.